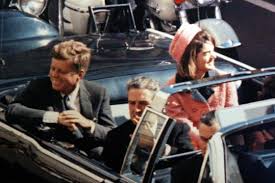 We had not been back in class from lunch break for long; it was still early afternoon in the west. Before the announcement was made, the decision by the school officials had been made to send us home. The busses would be lined up and ready to go in twenty minutes. Until then there would be a brief quiet period and then the teachers would talk to us and further calm the situation. Then off we would go to try to forge a path with our families, who would need us as much as we needed them.

Except for me and a handful of other kids. My mother was an educator and was not at home, so I and a few other similarly situated kids were kept at school until we could be picked up. Somehow it wasn’t right to be inside, so we all, along with another teacher, Mrs. Thomas, went outside and sat underneath a large palm tree in front of the school. We talked about how it could be that our President, our hero, our king, was dead. Maybe he wasn’t really dead, maybe it was all a mistake. Maybe Soviet troops were on their way; possibly tanks. This kind of excited me and the other boys; we perked up at this thought, tanks were cool. The Russians probably had awesome tanks. Each minute that passed made us feel a little better because there were no missiles in the sky. That was a good sign.

In about half an hour, maybe an hour, I don’t know any more, my mother drove up and off we went. My mother was also reassuring. It was good to be with her; mom saying it would all be alright meant a lot. Once home, we ate and sat dumbstruck and transfixed in front of the Curtis Mathes console television the rest of the afternoon and night. We watched Walter Cronkite on CBS and Chet Huntley and David Brinkley on NBC. These men were giants of news and journalism; to say that they don’t make them like that anymore is a understatement of untold proportion. Things slowly, but surely, stabilized; but it took awhile. A long while.

Well, that was my day fifty years ago. What was your day? Take a moment and reflect back and share with those of us that know the traumatic event, and help those who are younger to understand what the day was like. The palpable sorrow. The sinking, abiding fear. The comfort of teachers, friends and family. And what it means to you today, on this anniversary.

The last time I wrote this basic post, five years ago today, I ended with, inter alia, these words:

There may be another Kennedy like figure in our midst, Barack Obama. He stands to assume office in a similarly, albeit it from different factors, troubled time. The world roils and America’s existence hangs in the lurch; not from Soviet missiles, but our own selfishness, avarice and stupidity.

Well, that was hopelessly idealistic, and not yet tempered by knowledge of the real Obama that would govern, as opposed to the false “Hope and Change” guy who captured the imagination and dreams of liberals and well meaning people throughout the land. We sit in a different posture today.

There is still hope; but the real change, whether on authoritarian government, government surveillance, financial reform, liberal judicial philosophy, environmental protection, income inequality, and a host of other critical concerns still is yet to be seen.

On the fiftieth anniversary of one of our worst days, let there be hope for better ones ahead.

[Most all of this post was taken from a previous one I did five years ago. I cannot kick the vivid memories I have of November 22, 1963 as a child. It is still all I think of when I think of this day. It is that seared into who, and what I am. So, absent a few additions, it is set forth again herein]