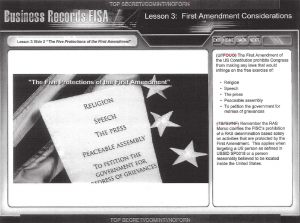 The sole discussion of First Amendment considerations in this undated training (it’s probably between early 2008 and 2011) is one page with a list of protected activities.

As I noted last week, from the start of the dragnet programs, neither the Court nor the government appear to have considered the implications dragnet analysis had for Freedom of Association.

Several of the training documents released last week — notably this August 29, 2008 NSA Memo — suggest the NSA reconsidered the associational implications of the dragnet in 2008. Nevertheless, in a document that appears to reflect an August 20, 2008 effort to protect associations, the NSA continued to use at least some associations as evidence of terrorist affiliation.

The rules on dragnet queries changed on August 20, 2008

As I noted some weeks ago, the government has withheld at least 3 FISC opinions pertaining to Section 215; one of the withheld opinions is dated August 20, 2008. This memo, written 9 days later, lays out the legal standard for contact-chaining for both the phone and Internet dragnet programs as described in two 2008 dockets.

Specifically, the memo elaborates on the legal standard applicable to the contact-chaining activities in which SID offices engage pursuant to Business Records Order 08-08 (as well as subsequent Orders for the production of telephony records)1 as well as to the contact chaining activities in which SID analysts engage pursuant to the Pen Register and Trap and Trace Order 08-110 (as well as subsequent Pen/Trap Orders ).

The documents must be the most recent, given the way the memo applies this standard to orders going forward. And it replaces an earlier memo, written just months after the start of the phone dragnet.

OGC memorandum dated October 13, 2006, same subject, is canceled. This memorandum updates the prior memorandum to reflect changes in the Foreign Intelligence Surveillance Court (FISC) authorizations specifically authorizing access to the data acquired under the Orders for analysis related to [redacted — probably describes terrorism subjects] The substantive guidance concerning the application of the “reasonable articulable suspicion” standard with respect to the authorizations remains unchanged.

All of which strongly suggests this memo served to incorporate whatever changes the August 2008 opinion made into NSA practice.

The change in the rules pertain to the treatment of association

The structure of the memo — along with the footnote’s explanation that the standards for Reasonable Articulable Suspicion  (cited above) have not changed — suggest that what did change pertains to Association.

After an introductory section, the memo has this structure:

A. Summary of the [RAS] Standard

In other words, the memo seems to assess the impact of an August 20, 2008 FISC opinion commenting on the degree to which First Amendment protected activity may serve as proof of a tie (an association) to a terrorist organization.

Regardless of what the FISC said, association is the same thing as membership

Before I lay out the logic dismissing any associational concerns presented by using phone contacts to assume a tie to terrorism, let me get to the punch line. After explaining that simply lobbying a member of Congress to “cut off funding for U.S. troops in Iraq” does not prove an association with terrorism (though some other NSA documents suggest it may have been regarded as such at one time), the memo explains that in some circumstances direct contact can do so.

But, as we have already made clear, we do not read the Order to preclude under all circumstances the conclusion that a number is associated with [redacted — probably terrorist groups] solely on the basis of its communications [redacted] and, more specifically, based on its contacts with numbers about which NSA has the appropriate level of suspicion. Our conclusion is supported by First Amendment law, as we discuss below.

In a footnote on that same page, the memo makes a breathtaking conflation of “member” and “associated with” a terrorist group.

We note also that the very object of the overall effort supported by these Orders is to determine whether or not particular individuals are members of or are associated with the terrorist organizations named in the Orders. Thus, under these Orders, simply by being a member of a named group one becomes subject to government scrutiny. [my emphasis]

That is, NSA sets out to argue that, regardless of whatever that FISC opinion states, association with a terrorist group (provided that they engage in direct contact) amounts to membership in it.

And here’s how that analysis ends up.

In other words, though the memo describes other evidence that might be used, if there isn’t any, to be treated as a terrorist associate for purposes of the dragnet, you need only have had direct contact with someone who is more likely than not a member of a terrorist organization.

In addition to the reliance on the same Reporters Committee case that NSA always relies upon to find that “data-gathering activities using legitimate investigative techniques do not violate the First Amendment, at least where no Fourth Amendment privacy is infringed,” the memo conducts more discussion on the Freedom of Association than they have elsewhere. In two paragraphs, the appear to distinguish between groups that air grievances, simple social contacts, and terrorism organizations this way.

In addition, the Amendment has also been construed by Courts to protect the freedom of association, a freedom not explicitly mentioned in its text. The Courts have opined that the right of association implied in the Constitution mainly protects associations when they are derivative of other First Amendment guarantees – normally speech, assembly and petition. For instance, in a case examining a university’s decision to refuse recognition to a student organization, Students for a Democratic Society, the Supreme Court stated: “While freedom of association is not explicitly set out in the Amendment, it has long been held to be implicit in the freedoms of speech, assembly and petition. Healy v. James, 408 U.S. 169, 181 (1972)(citations omitted) (emphasis added). Similarly, in one of many cases in which the issue was whether the government could compel an organization to turn over lists of its members, the Supreme Court observed that “[i]t is now beyond dispute that freedom of association for the purpose of advancing ideas and airing grievances is protected by [the constitution] from invasion by the States.” Bates v. City of Little Rock, 361 U.S. 516,522-523 (1960) (emphasis added).11 12.

(U//FOUO) By contrast, simple social contacts that do not rise to the level of organizations or associations erected for the purpose of engaging in speech do not enjoy the same degree of protection. For example, the Supreme Court, addressing the question whether the state could restrict admission to dance halls to persons between 14 and 18 years old, rejected a challenge based on the right of association and held that the state did indeed have such authority. In so doing, the Court found that there does not exist a “generalized right of ‘social association’ that includes chance encounters in dance halls.” See City of Dallas v. Stanglin, 490 U.S. 19, 25′(1989)_12

These two paragraphs seem to set up footnote 12 — the passage, above, that conflates association with membership. But having laid out that Freedom of Association extends to groups (like CAIR, which has been targeted for its alleged but flimsy ties to terrorist organizations, or ACLU, pro bono work for which seems to have gotten a Somali immigrant placed on a watch list) that air grievances, it doesn’t discuss how the NSA should assess the ties it sees in massive databases of associational metadata.

Association may make you a seed; what else will it make you?

For all the alarming things this memo suggests about NSA’s targeting practices, the application of it, at least as laid out here, seems to be somewhat limited. It appears to pertain to a 2008 FISC opinion purportedly placing new limits on using First Amendment activities as the basis for a “seed” used to query the dragnet databases.

Within 5 months of this memo, the government confessed to the FISC that it had been using “seeds” that weren’t RAS-approved to contact-chain the phone dragnet (we know less about the Internet violations, but it’s somewhat safe to assume something similar happened there, too). In response, Judge Reggie Walton required NSA’s General Counsel to approve any seed. And while subsequent documents make it clear analysts brainstorm seeds for approval by OGC, at least there is some review.

Still, this document was written by NSA’s Deputy General Counsel — the person who would be approving those RAS-determinations. And that person seems unable to recognize that association is not membership, or that some people who might be perceived to be more likely than not to be members of terrorist organizations might have completely legitimate phone and Internet contacts with groups that air grievances, like CAIR or ACLU (or journalists entitled to some press protections).

We don’t know in what other applications the NSA has used this logic. But it does seem like a poorly thought out justification for guilt by association spying.