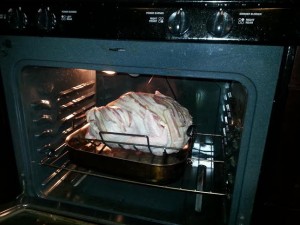 Some of you may have already grown tired of my tweets expressing awe that, rather than the 15 pound turkey I had ordered from our farmers, I came home Tuesday with a 21 pounder. They just didn’t have any smaller birds this year, it seems.

So there she is, our enormous bird, all slathered with bacon, also from Jill and Mary, far more than we need but enough that we’ll be enjoying (frozen) leftovers until summer.

It somehow feels appropriate that the turkeys are so big this year.

Last year, the farmers in Michigan — and those of us who purchase directly from them — seemed to reach Thanksgiving with a shocked worry. The summer of drought had devastated key Michigan crops, especially the state’s tart cherries. You couldn’t find Michigan pears and other orchard crops were similarly scarce. Meat farmers, even those who rely on local grains, had to cope with CAFOs from Indiana buying up all Michigan’s straw and grain; people thinned herds because there wasn’t enough food to make it through the winter. A number of the farmers we rely on seemed worried whether they would make it.

So while this year’s record floods brought new worries, when the crops all came in in order, and in great bounty, it was a relief. Fat Al Gore hadn’t done us in yet! I had enough tart cherries to dry and will still have MI pears in the fridge for several weeks yet. A local craft cider maker recently told me that scores of farmers with orchards of old, forgotten (but tasty!) apple varietals could save those orchards because they had a buyer for their boom harvest this year. And for Mr. EW and I, in the home we moved into the day before Thanksgiving last year, we’ve even still got green tomatoes, kale, and carrots from our garden. 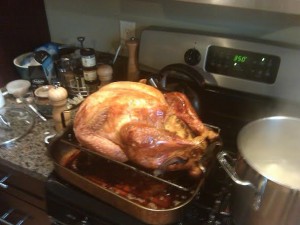 The harvest was especially generous this year.

But I’m also acutely aware that so many Michiganders — my neighbors — enjoy little of that bounty. MI was in a depression before the economy crashed, and too many people have never recovered. Because our unemployment remains among the highest, Michiganders will have access, still, to somewhat extended unemployment benefits. But every one of those long-term unemployed represents a family that may never recover from financial setback. Add in the cuts to food stamps, and I worry that what Mother Nature has spared (thus far), our dysfunctional society has condemned to suffer.

But let’s remember those who face scarcity among the bounty.

Updated with pic of done turkey. Before the 7.5 pounds of leftovers, I mean.