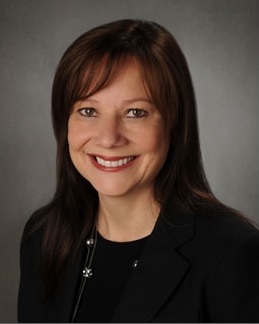 The woman in the photo at the right has big titanium ovaries — not malleable brass or rusting iron. Do I know Mary Barra personally to attest to this fact? No. But I have a pretty damned good idea where GM’s new CEO has been, and it takes a pretty tough set of specifications to survive the road she’s traveled.

Like her I grew up in the I-75 corridor in Michigan, where much of the automotive industry’s OEM facilities and Tiers 1 through 3 suppliers could be found. Like her father, my father worked in the automotive business; if her household was like mine, there were copies of Car and Driver, Road & Track, machinist, tool-and-die, and metalforming magazines cluttering coffee tables or in dad’s man-cave. The smell of machine oil and the grit of metal chips are familiar, as are an ever-present collection of safety glasses, hearing protection, and greasy jumpsuits. Picture a garage like that in Clint Eastwood’s movie Gran Torino; I’ll lay good money her dad probably spent a lot of his free time between shifts in a home shop like that, and where she might have been found as well if he needed a hand or she needed a tool to fix something.

It was in her blood, I’m sure; I’ll bet she could taste it. I’m pretty certain this is why she went into engineering, and likely why she went to that particular private engineering school.

After working for a couple years as a high school engineering co-op student I had been accepted at the same school, but I went a different road, preferring business and then-nascent computing technology over engineering. My daughter, though, is at that school now. She could taste it, too; we have pictures of her at age nine, wearing safety glasses, proudly holding her first aluminum machined part. She’s the first person her dad asks for help when working on the cars at home.

I wish now I’d taken pictures of her the time she was so damned mad at her brother and his friend for accidentally breaking the sibling-shared PlayStation 2 console. She ripped it down, diagnosed it using internet research, fixed and reassembled it on her own in an afternoon.

Driven to identify and solve the problem — that’s what it takes to choose engineering as a career, particularly if you are a woman.

Sure, men too must be driven to pursue the same field, but they don’t face the hurdles that women faced then or even now, 30 years after General Motors’ new CEO first started college at the former General Motors Institute. Nobody ever questions a boy’s right to pursue engineering, or a man’s right to practice that discipline. Nobody ever questions the gender of a man with an engineering degree when he makes it to the pinnacle of the corporate ladder.

My daughter still faces a rash of crap; she’s had to put up with it all through K-12 education, and it continues into college. Some of the gender bias crap is probably unconscious stupidity. The dean of one engineering discipline said, “The girls probably aren’t interested in this,” when leading a tour group of prospective students through an automotive design lab — for the second time that day, mind you, with students studying non-automotive related engineering. That male dean was probably clueless about his comment’s impact, let alone that ALL of the students regardless of gender had enough of that particular lab and wanted to see something more of the school. When asked, his senior-year student assistant brushed off the situation by saying that “girls want to go into electrical engineering anyhow, that’s where most of them are.” Another idiot; what a way to promote this school to female students, or persuade them to seek his own preferred field, mechanical engineering. This kind of stupidity didn’t end once school started, either. It was much, much worse when Barra was in school.

What both my daughter and Barra have had in common, though, was an awareness of what was happening in manufacturing that comes with being raised in and around it, and growing up in it as students. There are things adults do in front of engineering students that they don’t do in front of each other providing additional education. Smart students see these things and take note of future opportunities revealed. (I know I saw a LOT of waste as a co-op student doing scut work — great places for cost reduction.) There was a lot of room for learning and for improvement coming up through the ranks, provided one could survive the persistent sexist bullshit. Having grown up in households hearing shoptalk, then immersed in on-the-job training through co-operative education, Barra and my daughter have been better prepared than most young women going into science and technology fields, and they’re already rare as it is.

When media outlets say Mary Barra is a “retro choice” because she is an inside hire, I can tell you that’s bullshit. It’s damned hard to be a run-of-the-mill insider when one is a rare specimen. When Barra first went to engineering school she was one-in-eight (or greater) females-to-males in engineering curriculum; not all of those females who graduated went on to work at General Motors, either. The odds haven’t improved much in 30 years; my daughter is part of the one-in-five ratio of female-to-male students. Today even fewer women at what is now Kettering University go on to work at General Motors. It’s simply not a retro choice at all to hire a woman to lead a Fortune 500 company, let alone one with an engineering degree.

For a woman to survive, succeed, and become a leader in overwhelmingly male-centric disciplines and workplaces, it takes the ability to hold one’s own and then some. They don’t teach this in engineering school, or business school for that matter. Young women either find understanding mentors, have a rich background in their field before entry, possess stupendous amounts of moxie to gut it out, or some combination of these to make it.

And a woman has to want it badly enough to put up with decades of crap beginning the first time a boy or an adult barricades a girl inside society’s pink ghetto, saying, “Girls don’t play with tools,” or years of “Get out of here, only boys can play this game,” or “Girls suck at math and science,” and “Boys don’t like brainiac girls,” only to face bullshit marginalization like “She’s a retro choice.”

A woman has to have some titanium ovaries.

And a titanium spine, too.