Because Bill Binney made an observation about the high docket number of the phone dragnet order released this year, Sibel Edmonds has decided that Glenn Greenwald is hiding a bunch of Edward Snowden documents to protect Pierre Omidyar showing PayPal cooperated with NSA.

Here’s what Binney said, according to him.

Unfortunately, Sibel attributes some of her words to me. I do not know that PAYPAL is involved – only that financial data is being used by NSA. And, based on the “BR” number 13/80 on the Verizon court order to give records to NSA, I estimated that this program involved 78 companies. These would include: telecom’s, internet service providers, banks/finance/credit cards, travel, plus others. So, there’s a lot of business data being collected by NSA and the FBI. In the future, if I am to be quoted, I will have to I will have to insist on a pre-publication review. [my emphasis]

Now, like Peter Kofod, I don’t doubt that PayPal gives a ton of data to the national security state (more on what probably happens below).

But Binney’s comment appears to be based on a misunderstanding of how the FISA docket numbering works (though not one that changes his observation that “there’s a lot of business data being collected by NSA and the FBI”): that each docket pertains to a different company.

Given the filings we’ve seen from voluminous years — particularly 2009 — it is clear that DOJ uses one docket for all providers on a particular order. For example, 3 of the 4 docket numbers used for the phone dragnet in 2009 were 08-13, 09-06, and 09-13. For the entire 3 month period the primary order covers, all the orders and correspondence related to that primary order bears the original docket number. Even in the case where Judge Walton cut off and then resumed production (see 09-13 above) from just one provider got handled in that docketing system. The now public FISC docket appears to continue this practice, with BR 13-109 and BR 13-158 including all the correspondence on a particular order (in addition, there are the Misc dockets for lawsuits, and the 2007 docket tied to Protect America Act for the Yahoo challenge).

Here’s the redacted list of providers from the most recent order: 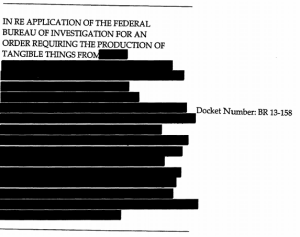 The additional providers are probably smaller providers, as well as VOIP providers.

So just 4 and on rare occasions 5 of the Section 215 (“BR”) docket numbers in any given year (and, for the life of the program, just 4 of the PR/TT docket numbers) covered all the providers.

But that may, in fact, mean far more companies are getting Section 215 orders, even bulk orders. As I laid out in this post, the numbers of Section 215 orders have gone up in the last several years (Julian Sanchez has speculated that previously some of this collection was done via National Security Letter, which is a pretty good bet).

And as they’ve gone up, the FISA Court has been modifying far more orders — it modified 86% of the orders in 2011. It has been modifying orders to add minimization procedures (it modified 176 orders in 2011 to add minimization requirements). Given that you only need to have significant minimization procedures if you’re getting a lot of innocent people’s data, and given that these orders would also be on a 90-day cycle, that may mean there were 44 bulk collection programs in 2011.

But, as Binney said, that’s going to include a lot of different kinds of companies. We know they’ve used Section 215 to collect precursor chemical purchase records. They likely cover credit cards records, other financial records, gun purchases, health and medical records, and other computer records. There have even been questions about using Section 215 to collect URL search terms.

PayPal is one possible or even likely recipient of these, but only one out of a bunch. (Plus, it likely would have been receiving NSLs rather than Section 215 orders when Pierre Omidyar had more involvement.)

There are two other things to remember about PayPal’s dealings with the National Security State.

First, its primary, affirmative obligation would be to provide Treasury Department information on any of its customers who appear to be money laundering or doing something else funky with their accounts, as well as those transferring more than $10,000. Treasury has been reaching out increasingly to non-bank entities more in recent years, which probably has brought even more scrutiny on PayPal, but PayPal has a bank and it would have had the obligation anyway for years. This reporting would be done by a compliance department, and would be above board (that is, it is a known obligation banks have). This data likely gets crunched by both Treasury and, for a variety of different uses (counterterrorism, proliferation, drugs), ODNI. I don’t know whether it gets shared with NSA or whether that kind of analysis happens at ODNI.

Then there would be compliance with NSLs and 215 Orders. The thing is, NSA claims (for what that’s worth) to only be involved in the phone dragnet orders. If that’s true, other NSL/215 orders would come from FBI. And records of those orders are far less likely to be in the Snowden documents (I don’t think we’ve seen any FBI documents to date). So one explanation for why Glenn Greenwald hasn’t found any PayPal documents is that PayPal documents likely weren’t on NSA’s servers, they were likely on Treasury and FBI’s servers.

Finally, there is one way NSA might access PayPal information. For purposes for which Section 215 (which is limited to counterterrorism and counterintelligence purposes) and Section 702 (which I believe is limited to counterterrorism, counterproliferation, and cybersecurity purposes) are not available, NSA might well get data from upstream collection overseas. I honestly think that’d be the most likely way NSA’d be getting PayPal information. But in that situation, PayPal wouldn’t know about it. (NSA doesn’t generally tell companies when it steals from them.) So maybe Glenn does have a random PayPal document in his possession, but if he does, it’s likely that Omidyar didn’t know about it.

(Also note, we’ve heard of at least one major Internet company CEO who is not read into his or her company’s NSA programs.)

None of that says anything about how much data PayPal gives the National Security State (it would be obliged to give a good deal to Treasury in any case). But it does explain why it’s unlikely we’d see much of it.