Dragnet at Bernie’s: On Spying on Congress 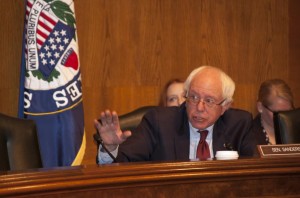 It turns out that Mark Kirk — not Bernie Sanders — was the first member of Congress to raise concerns about the NSA spying on Senators after Edward Snowden’s leaks started being published. Kirk did so less than a day after the Guardian published the Verizon order from the phone dragnet, in an Appropriations Committee hearing on the Department of Justice’s budget (see at 2:00). After Susan Collins raised the report in the context of drone killing, Kirk asked for assurances that members of Congress weren’t included in the dragnet.

Kirk: I want to just ask, could you assure to us that no phones inside the Capitol were monitored, of members of Congress, that would give a future Executive Branch if they started pulling this kind of thing up, would give them unique leverage over the legislature?

Kirk: I’m going to interrupt you and say, the correct answer would say, no, we stayed within our lane and I’m assuring you we did not spy on members of Congress.

The first substantive question Congress asked about the dragnet was whether they were included in it.

After that, a few moments of chaos broke out, as other Senators — including NSA’s representative on the Senate Intelligence Committee, Barb Mikulski — joined in Kirk’s concerns, while suggesting the need for a full classified Senate briefing with the AG and NSA. Richard Shelby jumped in to say Mikulski should create the appropriate hearing, but repeated that what Senator Kirk asked was a very important question. Mikulski agreed that it’s the kind of question she’d like to ask herself. Kirk jumped in to raise further separation of powers concerns, given the possibility that SCOTUS had their data collected.

The very first concern members of Congress raised about the dragnet was how it would affect their power.

And then there was a classified briefing and …

… All that noble concern about separation of power melted away. And some of the same people who professed to have real concern became quite comfortable with the dragnet after all.

It’s in light of that sequence of events (along with Snowden’s claim that Members of Congress are exempt, and details about how data integrity analysts strip certain numbers out of the phone dragnet before anyone contact-chains on it) that led me to believe that NSA gave some assurances to Congress they need not worry that their power was threatened by the phone dragnet.

The best explanation from external appearances was that Congress got told their numbers got protection the average citizen’s did not, perhaps stripped out with all the pizza joints and telemarketers (that shouldn’t have alleviated their concerns, as some of that data has been found sitting on wayward servers with no explanation, but members of Congress can be dumb when they want to be).

And they were happy with the dragnet.

Then, 7 months later, Bernie Sanders started asking similar — but not the same –questions. In a letter to Keith Alexander, he raised several issues:

He even defined what he meant by spying.

“Spying” would include gathering metadata on calls made from official or personal phones, content from websites visited or emails sent, or collecting any other data from a third party not made available to the general public in the regular course of business.

In response, Alexander rejected Sanders’ definition of spying (implicitly suggesting it wasn’t fair), while using a dodge he repeatedly has: the Americans in question are not being targeted, even while they might be collected “incidentally.”

Nothing NSA does can fairly be characterized as “spying on Members of Congress or other American elected officials.”

NSA may not target any American for foreign intelligence collection without a finding of probable cause that the proposed target of collection is a foreign power or an agent of a foreign power. Moreover, as you are aware, whenever an NSA activity results in the incidental collection of information about Americans, that information is handled pursuant to the very robust procedures designed to protect privacy interests — procedures that must be approved by the Attorney general or the Foreign Intelligence Surveillance Court, as appropriate. All those protections apply to members of Congress, as they do to all Americans.

Alexander then addressed just one of the three kinds of spying Sanders raised: phone data (which, if I’m right that NSA strips Congressional numbers at the data integrity stage, is the one place Alexander can be fairly sure Sanders’ contacts won’t be found).

Your letter focuses on NSA’s acquisition of telephone metadata…

And used the controls imposed on the raw data of the phone dragnet as an excuse for not answering Sanders’ question.

Among those protections is the condition that NSA can query the metadata only based on phone numbers reasonably suspected to be associated with specific foreign terrorist groups. For that reason, NSA cannot lawfully search to determine if any records NSA has received under the program have included metadata of the phone calls of any member of Congress, other American elected officials, or any other American without that predicate.

Which is mighty convenient, because for a very large segment of that collection (the internet metadata collected under EO 12333 and via PRISM, though not the data collected domestically before 2011 or domestic upstream collection), NSA believes it doesn’t even need Reasonable Articulable Suspicion to search on US person identifiers. The same is true for any phone dragnet data that has been returned on a query and dumped into the “corporate store,” or any phone data collected overseas. NSA could easily search in those databases for Sanders’ name and identifiers — it insists it can! — to provide him a specific answer to his question about Internet metadata.

The one Alexander rather pointedly didn’t answer.

Of course, former FISC Judge John Bates has told NSA — on two different occasions — that collecting US person data domestically only becomes illegal once NSA knows it is doing it, strongly implying that the NSA would do well to retain plausible deniability about doing so if it doesn’t want any trouble from the FISC.

Frankly, I think all members of Congress, especially those like John McCain and Mark Kirk who spend a lot of time talking to leaders we probably do wiretap as much as we can, should be worried about having their conversations surveilled (and I think that explains why Congress in general and McCain in particular got newly concerned about the spying when the extent of foreign leader wiretapping became clear). Because they chat up foreign leaders so frequently, they are likely to be caught up as “incidental” collections.

The could find out, of course! Just ask NSA to do a back door search, of most things but raw US collected metadata, and the NSA has the ability to tell them whether they’ve been searched.

tweets from our circle
Ed Walker 🍞🌹💉💉@MasaccioEWRT @WVUMAMA2: @MarshaBlackburn Sadly, it's the American public who put their lives on the line every day when they go to work, church, a co…27 minutes ago17 May 2022
emptywheel@emptywheelRT @WarintheFuture: This is another first rate article from @LawDavF. This time, he explores the maritime domain, the strategic impacts of…55 minutes ago17 May 2022
emptywheel@emptywheelThis fake Mike Flynn lawsuit gets better. He's gonna sue the people who DIDN'T prosecute him for prosecuting him.… twitter.com/i/web/status/1…1 hour ago17 May 2022
bmaz@bmazpic.twitter.com/mPIruVeVGj5 hours ago17 May 2022
bmaz@bmazMrs. bmaz says it is too hot to walk the doggo already. What is a poor boy to do?9 hours ago17 May 2022
Ed Walker 🍞🌹💉💉@MasaccioEWWait til DeSantis hears what his sweethearts of SCOTUS think of this as respects anti-abortion freaks protesting th… twitter.com/i/web/status/1…13 hours ago16 May 2022
Ed Walker 🍞🌹💉💉@MasaccioEWRT @JC_Christian: House GOP caucus in hiding after spotting a witch. twitter.com/StevenTDennis/…13 hours ago16 May 2022
Jim White@JimWhiteGNVGoodbye Cyprus, hello Germany. Strange changes happened mid-route on the train, and we wound up on the wrong side o… twitter.com/i/web/status/1…2 days ago15 May 2022
Jim White@JimWhiteGNVVery pleasant final breakfast in Cyprus. Strolling saxophone. And then the champaign came out… pic.twitter.com/yLIVs02GHL3 days ago14 May 2022
RayneToday@raynetodayLet's not ignore the plea for others to be "awake & watching!" is the entitled cis-het white dude version of "stay… twitter.com/i/web/status/1…4 days ago13 May 2022
RayneToday@raynetodayRT @marceelias: I am concerned about what might be behind this.👀 clickorlando.com/news/local/202…4 days ago13 May 2022
RayneToday@raynetodayRT @EmmyA2: I’m a lot less interested in the infuriating, but inevitable, outcome of this vote than I am in how much hell Democrats are goi…6 days ago11 May 2022
RayneToday@raynetodayRT @DougJBalloon: Whether it’s the right painting Swastikas in blood on synagogues, or the left writing pro-choice slogans in chalk on Susa…6 days ago11 May 2022
RayneToday@raynetodayRT @waltisfrozen: Lemme get this straight. My children are expected to be tough enough to go through regular "how to avoid getting murdered…6 days ago10 May 2022
NSA: The Hegemon’s Economic Spying Is Okay, Unlike the Challenger’s... Faster and Furiouser Domestic Spying: Why Would the NSA Review Group Talk to...
Scroll to top