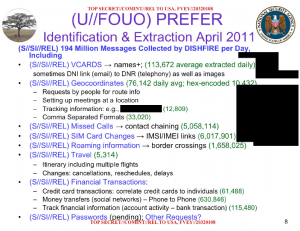 The Guardian today reported a story that presents a bigger issue for Brits than Americans: the NSA is capturing 200 million text messages a day and then mining their content for metadata. While the Guardian states that documents say American text messages are minimized, GCHQ does search on this information without a warrant.

The documents also reveal the UK spy agency GCHQ has made use of the NSA database to search the metadata of “untargeted and unwarranted” communications belonging to people in the UK.

Communications from US phone numbers, the documents suggest, were removed (or “minimized”) from the database – but those of other countries, including the UK, were retained.

But I think the story and accompanying document is most telling for the kinds of information they’re mining in a program called PREFER.  By mining the content of SMS text messages, NSA is getting information:

And all of this is tied to someone’s phone-based ID.

I’m not surprised they’re doing it. What they’re calling “Metacontent” (a lot of it involved XML tagging) is, like Metadata, more valuable than actual content (and much less of it needs to be translated.

But it provides the beginning of an explanation of how NSA is build dossiers on people around this world; it turns out their text messages may serve as one piece of glue to bring it all together.

One more point: I noticed in last year’s 702 compliance report that the number of phone targets under 702 have been going up since 2012 after having declined between 2009 and 2012 (see page 16). I’ve been wondering why that was. The rapid reliance on text messaging and the NSA’s ability to mine it more thoroughly may provide one possible explanation (though there are others).