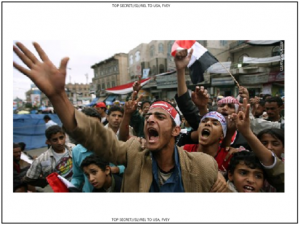 Sometime in 2011, I was on a panel with the Democracy Now’s Sharif Kouddous — whose tweeting from Tahrir Square played an important role in keeping the world informed after Hosni Mubarak shut down the Internet. I mentioned that DiFi had been bitching for months because the CIA and other intelligence agencies had missed the Arab Spring.

Who had followed Sharif on Twitter, I asked? (Probably half the rather large room raised their hands.) Because if you had, you knew more about the Arab Spring than the CIA did.

Which is the underlying context to the NBC/Greenwald report that GCHQ collects data from Facebook and YouTube to try to monitor the mood of the world.

The demonstration showed that by using tools including a version of commercially available analytic software called Splunk, GCHQ could extract information from the torrent of electronic data that moves across fiber optic cable and display it graphically on a computer dashboard. The presentation showed that analysts could determine which videos were popular among residents of specific cities, but did not provide information on individual social media users.

The presenters gave an example of their real-time monitoring capability, showing the Americans how they pulled trend information from YouTube, Facebook and blog posts on Feb. 13, 2012, in advance of an anti-government protest in Bahrain the following day.

More than a year prior to the demonstration, in a 2012 annual report, members of Parliament had complained that the U.K.’s intelligence agencies had missed the warning signs of the uprisings that became the Arab Spring of 2011, and had expressed the wish to improve “global” intelligence collection.

During the presentation, according to a note on the documents, the presenters noted for their audience that “Squeaky Dolphin” was not intended for spying on specific people and their internet behavior. The note reads, “Not interested in individuals just broad trends!”

What we’re seeing is how NSA would go about amassing public data to try to learn what the rest of us can read by following Twitter attentively. [see update]

I won’t comment much on the technical ability here (which involve contractors to collect the data), and I’ll only applaud that Facebook has finally been exposed as the perfect surveillance app it is.

But there seem to be several problems with the analysis they’re doing (though MSNBC did not include the script for its PowerPoint). Aside from what seems to be an Orientalism built into the analysis… 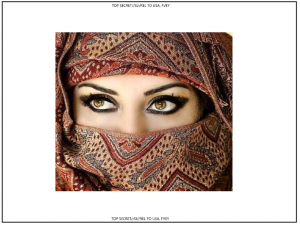 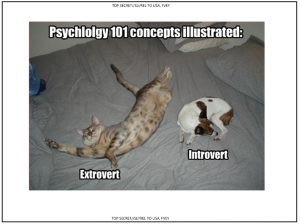 Nowhere does this presentation distinguish between the propaganda social media accounts and the legitimate ones — a known problem of social media analysis going back years (which has, because of the all the competing parties involved, been particularly acute in Syria). Perhaps they deal with this, but this analysis seems ripe for spamming by propaganda, particularly if it came from frenemies who know GCHQ and NSA use such analysis.

Now, presumably someone somewhere else in the combined Intelligence Communities of the US and UK would actually sit down and read the social media of a potential hotspot, which is the way a bunch of Tweeps in their pajamas can get a sense of what’s going on without collecting all the social media data for an entire country first. Such an approach uses the hive mind you acquire on social media, with the built in assurances from trusted interlocutors.

After the Arab Spring, the Intelligence Communities of a number of nations got their asses kicked because none of them are well suited to figure out what non-elites are doing. But from the looks of things, they just hired some contractors with bad attitudes to have something to offer up, no matter how dubiously effective.

Update: My statement was inaccurate. They got this data by tapping the cables.

tweets from our circle
emptywheel@emptywheelFor those interested in technical side of Sussmann trial, here's one of the exhibits that came in at trial. It ca… twitter.com/i/web/status/1…10 minutes ago24 May 2022
emptywheel@emptywheelRT @SollenbergerRC: She mentions the Waukesha parade vehicle massacre as an example of racist violence. It wasn’t. But if that wrongheaded…26 minutes ago24 May 2022
bmaz@bmazWho? Source: Commanders spend $100M on Va. land espn.com/nfl/story/_/id…4 hours ago24 May 2022
bmaz@bmazRT @LemonSlayerUS: @MatorinLaw @bmaz @MrKovalenko @SecDef Better than getting this promotion.👇 pic.twitter.com/pVxEw8lnlg4 hours ago24 May 2022
Jim White@JimWhiteGNVRT @bettycrackerfl: I’d like a full accounting of how much FL taxpayers have paid to lawyers defending the shoddy work products signed by @…5 hours ago23 May 2022
Ed Walker 🍞🌹💉💉@MasaccioEWRT @RedEyedDespair: Damn that's crazy, why aren't you fighting for healthcare then twitter.com/TheDemocrats/s…9 hours ago23 May 2022
Ed Walker 🍞🌹💉💉@MasaccioEWRT @tribelaw: Alito’s Five Fallacies: 1. Women’s lives won’t be turned upside down 2. We are just returning this issue to the states 3. “On…11 hours ago23 May 2022
Ed Walker 🍞🌹💉💉@MasaccioEWRT @josefmtz: this paragraph is brutal. we truly are in an “emperor has no clothes” point in history pic.twitter.com/XWhBwdMdH312 hours ago23 May 2022
RayneToday@raynetodayLOL Perhaps the mythical "single server" the right-wing wanted turned over after the DNC was hacked already resides… twitter.com/i/web/status/1…1 day ago22 May 2022
RayneToday@raynetodayRT @darth: i know this is completely unrelated but imagine spending nine fuckin hours with that guy3 days ago21 May 2022
RayneToday@raynetodayRT @wyatt_privilege: Not a mind blowing observation but the game now is to send crazy shit upstairs to scotus and invite them to remold, sc…5 days ago19 May 2022
Judge Lamberth Takes DOJ to Woodshed; DOJ Moves Peas Under Different Pods US Doubles Down on “Crazy Karzai” Meme
Scroll to top