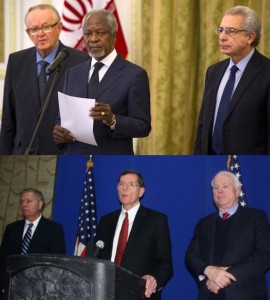 Today’s Washington Post carries a story that is quite unlike their usual coverage that tends to tilt toward violence answering most problems. In the story is a striking photo of former UN Secretary-General Kofi Annan, former President of Finland Martti Ahtisaari and former President of Mexico Ernesto Zedillo. Annan, Ahtisaari and Zedillo are traveling as a contingent of The Elders (Mehr News states that Desmond Tutu also traveled with the group), a group founded by the late Nelson Mandela, and are visiting Tehran. When I saw the photo and read the story, I couldn’t help noting the striking contrast between this group of elder statesmen who are traveling the globe to promote peace and diplomacy while the US is saddled with elected representatives who
travel the globe to promote war. The “Three Amigos” of Lindsey Graham, John McCain and Joe Lieberman made too many trips to count, always doing their best to promote America’s forever wars and to advocate spreading them to more countries. With Lieberman’s retirement from the Senate, the latest trip for hypocrisy tourists McCain and Graham had John Barrasso sitting in the third position as they went to Kabul to lobby for indefinite detention without charges and for Karzai to sign the Bilateral Security Agreement so that US troops can remain in Afghanistan after the end of this year.

Members of the Elders, a group of former statesman and high-profile peace mediators promoted by the late Nelson Mandela, are visiting Tehran to push for compromises on disagreements between Iran and world powers.

“We must rebuild trust and mutual respect in the region, which is not easy and requires patience,” former United Nations secretary general Kofi Annan said Monday. Annan, a member of the delegation, made the remarks at the Iranian Foreign Ministry.

The lofty purpose of the three-day visit is to “encourage and advance the new spirit of openness and dialogue between Iran and the international community, and to explore what could be done to enhance cooperation on regional issues,” according to a statement issued by the Elders ahead of their arrival in Tehran.

In a press release Monday, after the first day of the visit, Annan had this to say:

As President Rouhani said to the UN General Assembly in September, that alongside widespread fears in the world today, and I quote:

“There are new hopes; the hope of universal acceptance by the people and the elite all across the globe of ‘yes to peace and no to war’; and the hope of preference of dialogue over conflict and moderation over extremism.”

We believe there has been a number of recent positive developments, most importantly the interim nuclear agreement, signed in Geneva last November. These efforts now need to be sustained to achieve final agreement.

In this regard, we must rebuild trust and mutual respect in the region and further afield. This is not an easy task. It will need patience and perseverance.

Contrast that diplomacy with this Lindsey Graham quote found in the New York Times coverage of the trip to Kabul and in reference to Afghanistan releasing prisoners who have been cleared by the review board at Parwarn Prison:

Graham only knows war and retribution, this time in the form of cutting off aid.

The world benefits greatly when shuttle diplomats are allowed to ply their trade to promote peace. If the shuttle war mongers are ignored, real progress is likely to ensue.