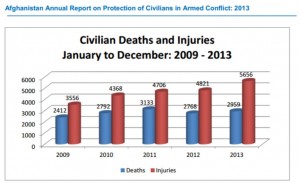 The United Nations is the best source of information on the impact of the war in Afghanistan on civilians. They released their latest data this weekend (pdf), and their results show that the vaunted “surge” of US troops into the country in early 2010 through late 2012 failed to protect civilians. In fact, the data show that civilian injuries have shown a steady rise from 2009 pre-surge levels through 2013’s post-surge period. Civilian deaths rose in 2010 and 2011. They went down slightly in 2012 before rising again in 2013.

Despite this clear indication that the surge was a waste of lives and money, recall that the Pentagon continued to spew its positive spin as troops were drawn down. From September, 2012 as the surge ended:

Very quietly, the surge of troops into Afghanistan that President Obama announced to such fanfare in late 2009 is now over.

Defense Secretary Leon Panetta said today that 33,000 troops have been withdrawn, calling the Afghan surge “a very important milestone” in a war the Obama administration is winding down; there are sill 68,000 U.S. troops in Afghanistan.

The “surge did accomplish its objectives of reversing the Taliban momentum on the battlefield and dramatically increase the size and capability of the Afghan national security forces,” Panetta said.

As seen in the UN data, the surge did nothing to reverse attacks on civilians, with civilian casualties continuing a steady increase. How about Panetta’s other claim, the one about dramatically increasing the size and capability of Afghan national security forces? To answer that, we depend on data supplied by the Special Inspector General for Afghanistan Reconstruction. Their latest report can be found here (pdf). Once again, the target for ANSF size was not achieved, even after moving the goalposts (footnotes removed):

But the reality could be far worse than those numbers indicate. While the force size falls just barely short of the target, the functionality of those troops is suspect. Further, it appears that Afghanistan may be playing games with the meaning of “available” (sorry, this bit of text won’t copy, so I have to use images instead): 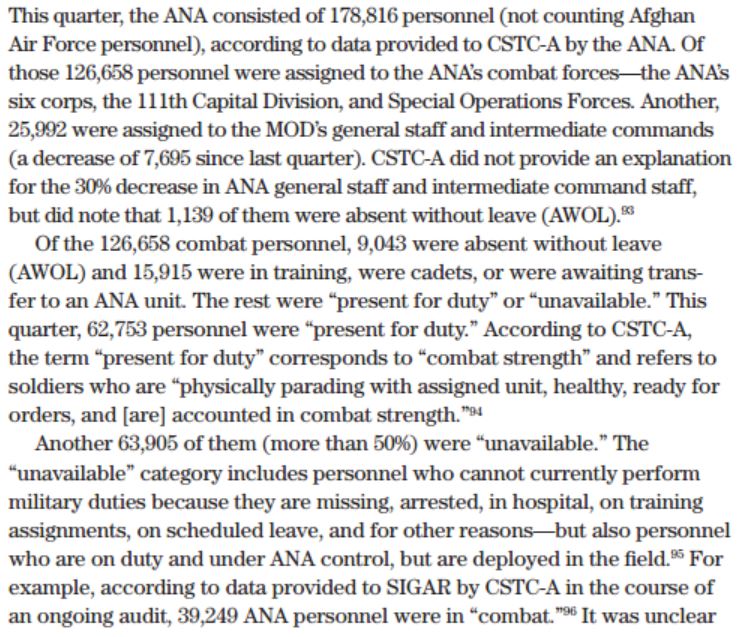 Somehow, the Afghans have decided to mix the count of troops that are still in training, in jail or missing with those who are deployed for combat. At any rate, it appears that the number of Afghan troops who are trained, present and either deployable or deployed is significantly below the force size that is reported. It should come as no surprise that SIGAR is in the process of auditing the fiasco of ANSF self-reporting on force size and availability.

Sorting through those numbers gives a very troubling view. Of the 126,658 ANA combat force members, there were 9043 AWOL and 15,915 still in training. Of the strangely classified “unavailable” count of 63,905, we learn that 39,249 of them were in combat. That seems to leave 24,656 as truly unavailable. Combining these groups gives a whopping 49,614 who are unable to be used for defense. That means that of the 126,658, “force size” of the ANA combat force, fully 39% would not be included in an accurate assessment of troops ready and available for action.

In conclusion, then, Panetta’s claims about surge success both fail when held up to the light of data against which to compare them. UN data clearly indicate that the surge did nothing to stop the trend of increasing civilian casualties. Further, SIGAR data show that the training of ANSF to take over combat responsibilities also is an abject failure, with Afghanistan resorting to ridiculous manipulation of troop counts to create the illusion of a fully staffed and trained force which really sits at about 60% of the claimed combat force size.

Oh, and the SIGAR report places the total funds expended so far in this fabulous “training” adventure at just over $59 billion. How can the Defense Department and Obama administration think that extending this “training” past 2014 will accomplish anything different from extending the well-documented failure?

tweets from our circle
Ed Walker 🍞🌹💉💉@MasaccioEWMeanwhile, Repubs cheer DeSantis banning popular kids books. twitter.com/matthewstoller…5 minutes ago08 February 2023
Ed Walker 🍞🌹💉💉@MasaccioEWMarsha's social media intern is busy tonight quoting Fox News other Qrazy sources. twitter.com/MarshaBlackbur…7 minutes ago08 February 2023
emptywheel@emptywheelRT @DavidDark: "Polarization and trust in the media lie at the center of Gerth’s project. Yet he failed to consider how the dossier, not th…4 hours ago07 February 2023
bmaz ( @[email protected] )@bmazI don't ever promote much of anything, but this chocolate is seriously good. kuhl.com/kuhl/other/acc…1 day ago07 February 2023
bmaz ( @[email protected] )@bmazNobody wants to coach the Cardinals. twitter.com/Vikings/status…1 day ago06 February 2023
bmaz ( @[email protected] )@bmazWhy did you need a gun in Mexico, jackass? Am there quite frequently, and never needed a gun. NASCAR Star Kyle Bu… twitter.com/i/web/status/1…1 day ago06 February 2023
Jim White@JimWhiteGNVRT @bmaz: @JimWhiteGNV @ptoemmes @laRosalind This is important. The last time I heard about a Komodo, it bit Sharon Stone's husband. http…4 days ago03 February 2023
Death by Geolocation: “We’re Going after Their Phones” The Drone Assassinate Americans Overseas That Want to Kill Americans Overseas...
Scroll to top