On the Day Ron Wyden Asked Whether NSA Complied with US v. Jones, It Collected 4 Billion Cell Location Records 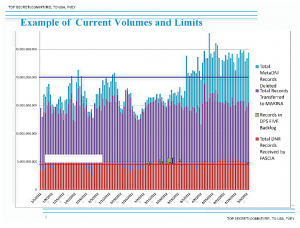 First, at the Global Threats Hearing 2 years ago just after the US v. Jones decision ruled GPS tracking a search (watching Ron Wyden discomfit Clapper at Threat Hearings used to be my exclusive beat, you know), they had this exchange.

Clapper: Sir, the judgment rendered was, as you stated, was in a law enforcement context. We are now examining, and the lawyers are, what are the potential implications for intelligence, you know, foreign or domestic. So, that reading is of great interest to us. And I’m sure we can share it with you. [looks around for confirmation] One more point I need to make, though. In all of this, we will–we have and will continue to abide by the Fourth Amendment. [my emphasis]

We now have proof (as if Wyden’s hints weren’t enough of a tell, given his track record) that NSA was collecting cell location at the time of Wyden’s question. While the exchange took place after (according to NSA’s public claims) NSA’s domestic experiments with cell data under Section 215 ended, it suggests the actual NSA collection took place outside of Section 215.

As it happens, NSA’s own slide shows that on the day Wyden asked the question — January 31, 2012 — it collected around 4 billion cell location records (it was a slow day that day — NSA had been collecting closer to 5 billion records a day in 2012). That collection presumably would have been conducted under EO 12333.

Given that we know NSA collected around 4 billion cell location records that day, I’m particularly struck by Clapper’s emphasis on two things: First his suggestion that the legal analysis might be different for an intelligence use than for a law enforcement use. Given his claim the IC abided by the Fourth Amendment, I assume he imagines they have a Special Need to suck up all this cell location data that makes such searches “reasonable.”

Also note his reference to “foreign or domestic.” I’m guessing the IC was also busy arguing that, in spite of the US person cell locations they were ingesting, because they were doing so in a foreign location, it didn’t violate the Fourth Amendment.

With all that in mind, consider Wyden’s question to Keith Alexander on September 26, just before Alexander admitted to the past Section 215 experiments as some kind of limited hangout.

Wyden: Senators Udall, Heinrich and I and about two dozen other senators have asked in the past whether the NSA has ever collected or made any plans to collect Americans’ cell-site information in bulk. What would be your response to that?

Gen. Keith Alexander: Senator, on July 25, Director Clapper provided a non-classified written response to this question amongst others, as well as a classified supplement with additional detail. Allow me to reaffirm what was stated in that unclassified response. Under section 215, NSA is not receiving cell-site location data and has no current plans to do so. As you know, I indicated to this committee on October 20, 2011, that I would notify Congress of NSA’s intent to obtain cell-site location data prior to any such plans being put in place. As you may also be aware, –

Wyden: General, if I might. I think we’re all familiar with it. That’s not the question I’m asking. Respectfully, I’m asking, has the NSA ever collected or ever made any plans to collect Americans’ cell-site information. That was the question and we, respectfully General, have still not gotten an answer to it. Could you give me an answer to that? [my emphasis]

Alexander stated publicly that they were not then and had no plans to obtain cell location data under Section 215. Wyden’s response — noting that Alexander’s Section 215 response didn’t answer their question at all — was a tell. NSA was collecting this data under a different authority, EO 12333.

One more point. When the WaPo revealed that (among other things) NSA collected 4 billion cell location records on the day Wyden and Clapper ahd that exchange, Robert Litt gave a new denial.

Robert Litt, general counsel for the Office of the Director of National Intelligence, which oversees the NSA, said “there is no element of the intelligence community that under any authority is intentionally collecting bulk cellphone location information about cellphones in the United States.”

His statement could mean two things:

Given the two years of word games we’ve gotten, I’m going to assume this is another one.