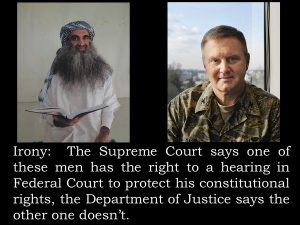 Col. Morris Davis is, at least for my money, an American hero. He served and fought not only for his country, but for the Constitution he swore to protect. The subject of what happened to him at the hands of the very government he defended deserves a much longer, and deeper, dive than I have time for in this post. We will likely come back for that at a later date as it seems as if the legal case Col. Davis brought to correct the wrongs done to him will likely go on forever.

And the going on forever part is the subject of this post. Col. Davis was scheduled to have a hearing in United States District Court in Washington DC tomorrow in front of Judge Reggie Walton. But the hearing was postponed. And that is the problem, this is the FOURTEENTH (14th) TIME hearing on Col. Davis’ case has been delayed. One delay was due to a conflict on Judge Walton’s part, and one because the offices of Davis’ attorneys at the ACLU in New York were substantially damaged by Hurricane Sandy. Other than that, the delay has been at the hands of an intransigent and obstreperous DOJ. If the actions of the DOJ in relation to Col. Davis are not “bad faith”, it is hard to imagine what the term stands for.

Now, to be fair, it appears the latest delay was at the unilateral hand of the court, as yesterday’s minute entry order reads:

In light of the fact that potentially dispositive motions remain pending, it is hereby ORDERED that the status hearing currently scheduled for Friday, February 21, at 9:15 a.m. is CONTINUED to a date and time to be determined by the Clerk.

The problem with that is that the “dispositive motions” the court speaks of as being “pending” have been “pending” for a VERY long time, since July of last year. And the case itself has been going on since the complaint was filed on January 8, 2010.

Why is it taking so long you ask? Because of the aforementioned bad faith and obstreperousness of the Department of Justice, that’s why. To get an idea of just what is going on here, a little background is in order. Peter Van Buren gives a good, and relatively brief synopsis:

Morris Davis is not some dour civil servant, and for most of his career, unlikely to have been a guest at the Playboy Mansion. Prior to joining the Library of Congress, he spent more than 25 years as an Air Force colonel. He was, in fact, the chief military prosecutor at Guantánamo and showed enormous courage in October 2007 when he resigned from that position and left the Air Force. Davis stated he would not use evidence obtained through torture. When a torture advocate was named his boss, Davis quit rather than face the inevitable order to reverse his position.

Morris Davis then got fired from his research job at the Library of Congress for writing an article in the Wall Street Journal about the evils of justice perverted at Guantanamo, and a similar letter to the editor of the Washington Post. (The irony of being fired for exercising free speech while employed at Thomas Jefferson’s library evidently escaped his bosses.) With the help of the ACLU, Davis demanded his job back. On January 8, 2010, the ACLU filed a lawsuit against the Library of Congress on his behalf. In March 2011 a federal court ruled against the Obama Administration’s objections that the suit could go forward (You can read more about Davis’ struggle.)

Moving “forward” is however a somewhat awkward term to use in regards to this case. In the past two years, forward has meant very little in terms of actual justice done.

Yes, you read that right. Col. Davis was fired from the job he truly loved at the Congressional Research Service because he, on his own time as a private citizen, exercised his First Amendment right to speak. As one of Davis’ pleadings puts it:

Col. Davis was unconstitutionally removed from his position at the Library of Congress’ Congressional Research Service for writing opinion pieces in the Wall Street Journal and the Washington Post expressing his nonpartisan, personal views on the failures of the American military commissions established to try detainees at Guantánamo Bay, Cuba. His speech lies at the very core of the First Amendment and exemplifies the kind of speech that federal courts have been most vigilant in protecting from government retaliation.

The full pleading that quote came from, Col. Davis’ response to the government’s motion for summary judgment (one of the “pending dispositive motions”) can be found here and is a good read if you are interested in more background.

That is exactly what happened and what is at stake. And you do not have to take my word for it, Judge Walton thinks it is a solid and valid claim too. Here is language from Judge Walton in an order in late January 2010, not long after the case was filed:

The Court is satisfied that the plaintiff has established, at least based on the record before the Court at this time, that the likelihood of success on the merits and public policy prongs of the preliminary injunction standard weigh in his favor. Essentially, the record before the Court suggests that the plaintiff was terminated immediately after two specific opinion editorials he authored were published in national newspapers. Regardless of the defendants’ contention to the contrary, it appears that the content of the plaintiff’s published opinions was one of the reasons, if not the primary reason, he was fired, i.e., because the plaintiff took a position on the prosecution of detainees being housed at the United States military’s Guantánamo Bay facility which the Congressional Research Service felt would call into question its impartially as to any policy recommendation it would make and any research it would conduct on that issue. This conclusion is supported by the fact that the opinion articles were specifically referenced in the plaintiff’s termination letter, and also the timing of the letter, which was issued only several days after his writings were published. The plaintiff’s likelihood of success position therefore is well-founded, at least with respect to the record the Court now has before it. And as to the public interest prong, it cannot be questioned that government employees retain First Amendment rights. (citations omitted)

So, there is really no question but that protected First amendment rights were involved, and that Col. Davis was wrongfully fired for exercising them. Makes you wonder why the DOJ would string him out and fight so hard in a case that is only about the rights and not even about the money damages he suffered as a result (that would have to be litigated in a separate action).

As the graphic at the top questions, why is the DOJ willing to give free speech rights to a terrorist at Guantanamo and not to Col. Morris Davis? Bad faith is the answer. Complete, scandalous, bad faith.