Minority Report on Ukraine, or What’s Venezuela Got to Do with It? 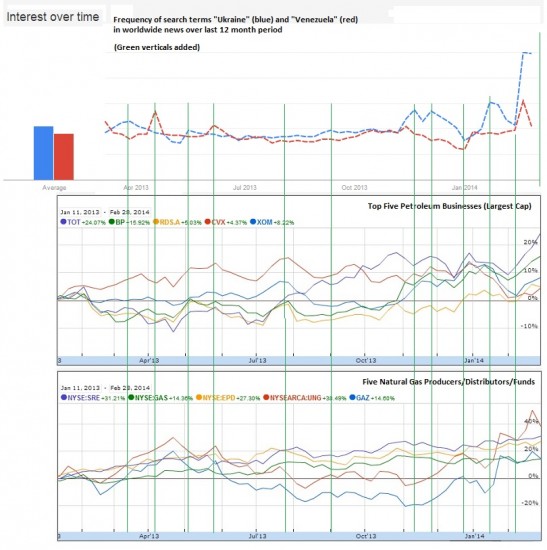 This in turn led me to revisit the rather interesting +30% break in natural gas pricing Russia offered Ukraine in December as well. This seemed like a rather odd move at the time considering global consumption is expected to increase, not decrease. Was this a chit to ensure continued natural gas pipeline cooperation? Or was this, in concert with a $15 billion loan, merely a means to decrease volatility by easing a neighbor’s economic pressures?

[Sidebar: the pipeline map above also puts Stuxnet and related cyberweapons in a different light. Stuxnet’s original target may have been Iran’s Natanz nuclear facility, but another related malware, W.32.Flamer also attacked oil pipelines at Iran’s Kharg Island, through which 90% of Iran’s oil exports are handled. Flamer hit in April 2012; in December 2012, another attack attributed to Stuxnet targeted the Bandar Abbas electricity plant. Bandar Abbas supplied power to neighboring provinces, which may have included Kharg Island.]

I’ll leave it to you to make your own assessment as to what this all means.

I do think that a country like Ukraine, composed of so many easily fragmented factions, tetchy from a history of repeated tug-of-war, is easily gamed by the parties who have the most to gain from doing so. I also don’t think all the parties actively pursuing fragmentation are nation-states, which may also be sucked in and gamed hard, spreading more fragmentation.

Further, Ukraine as well as Venezuela half a world away are both rather large pieces in a globe-sized “game.” Tweaking either of them on this massive board creates ripples affecting far more than their immediate neighbors or their obvious military bedmates.

The only moves that might remove fossil fuels as a possible factor in tensions like that of Ukraine and Venezuela are a dramatic reduction in consumption based on conservation and radically increased investment in renewable alternative energy resources.