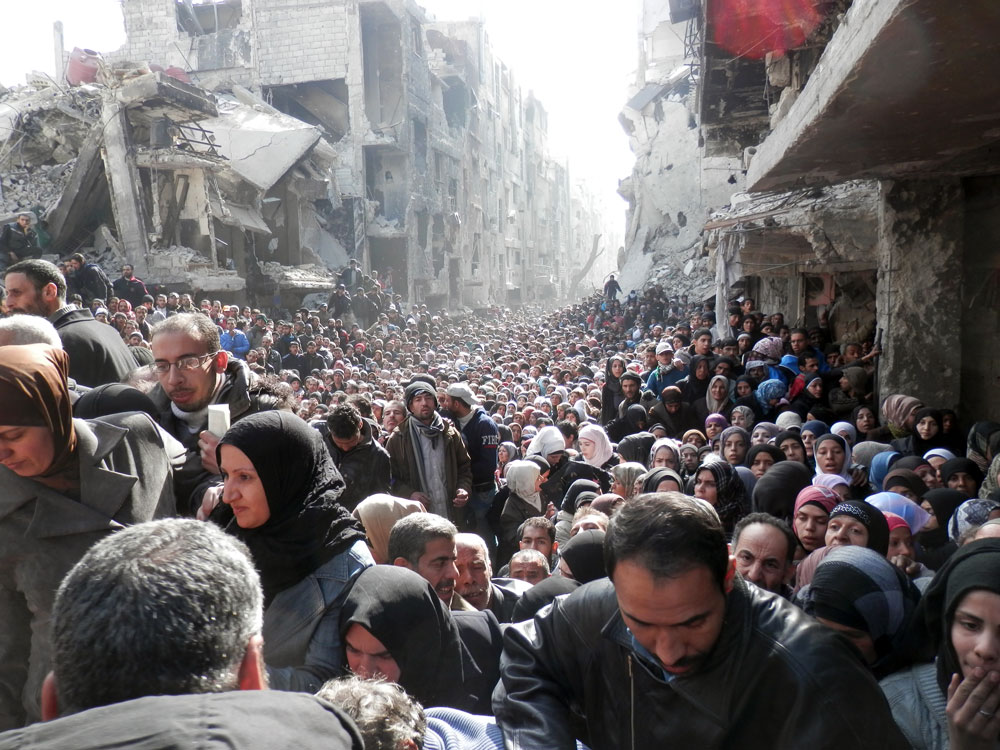 Here is the video Farid mentions, and the opening scenes do indeed match the photo in location and crowd size. Further, we get multiple vantage points in the video, making it quite clear the crowd was real:

UNRWA is carrying out a huge public awareness campaign to aid those who are starving in Syria:

The global humanitarian community has released a joint “Thunderclap” statement demanding “immediate, secure, substantial and permanent humanitarian access for all civilians in Syria, including countless children. The statement, which comes a week after the UN was last able to deliver food to Yarmouk camp in Damascus, is signed by 130 organisations, including major United Nations agencies and International Non Governmental organizations along with smaller, grassroots groups with deep reach into local communities.

The statement urges “all parties on the ground to listen to the voice of the international community as expressed unanimously through the Security Council and to act now to halt the march of death, injury, hunger and suffering.” It makes a call to world leaders on the third anniversary of the start of the conflict;  “Don’t let the people in Syria, children and families, lose another year to bloodshed and suffering, violating the most fundamental laws of war.”

Explaining the campaign, UNRWA Spokesperson, Chris Gunness said, “This is part of a Thunderclap social media campaign which aims to reach 23 million people with the hashtag “LetUsThrough. The “Thunderclap” itself will be at noon Yarmouk time on 18th March, when a tweet with our campaign hashtag will be released to millions of people who will have signed up for the campaign. Anyone can join the campaign, individuals and organizations. Once we reach 23 million, the iconic campaign image (attached) of thousands of civilians waiting for food in Yarmouk Camp will appear on the world famous electronic billboard in New York’s Times Square, sending a powerful signal to the global diplomatic community in UN Headquarters nearby.”

Gunness added, “ We will then photograph the image in Times Square and tweet it back to the 23 million who supported the campaign, including the people of Syria. So it is a campaign bringing together humanitarians all round the world, sending a powerful diplomatic message but also sending a signal of solidarity  with all civilians in Syria, who have suffered enough because of this pitiless conflict. We also hope that diplomats at the UN and members of the public will take “selfies” with the image as a backdrop and send them round the world as an act of solidarity.”

The Thunderclap campaign can be joined here.