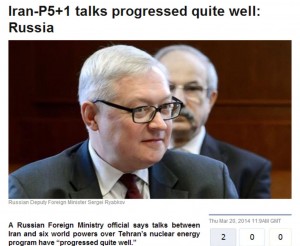 Screengrab from the PressTV story on Ryobkov’s comments.

On Tuesday, I noted that Alissa Rubin provided an outlet for an unidentified “senior American official” to put into the New York Times concerns that Russia might allow the disagreement over Crimea to affect their negotiating stance in the P5+1 talks with Iran in Geneva on Tuesday and Wednesday. This was, of course, despite an encouraging statement by chief Russian negotiator Deputy Foreign Minister Sergei Ryabkov showing optimism about the negotiations that were about to begin.

Despite these concerns by the American official, it appears that the talks went well. Fredrik Dahl reports that Iran was happy with how the talks went:

“In terms of understanding and clarification, Vienna-2 was among our very successful round of talks … extremely beneficial and constructive,” it quoted Zarif as saying.

But once the talks had finished, with the next round not scheduled to begin until April 7, Ryobkov played the US press expertly, and AP’s George Jahn was quick to take the bait:

U.S.-Russian tensions over Ukraine spilled over into nuclear talks with Iran Wednesday, with Moscow’s chief envoy at the negotiations warning that his country may take “retaliatory measures” that could hurt attempts to persuade Tehran to cut back on programs that could make atomic arms.

The statement, by Deputy Foreign Minister Sergei Ryabkov, appeared to be the most serious threat of reprisal by Moscow for Western sanctions against Russia over its annexation of Ukraine’s Crimea region.

Russia is key to attempts to coax Iran into significant long-term curbs of its nuclear program in exchange for relief from U.N. and other sanctions. Iran insists it does not want nuclear arms but is seeking a deal that will result in full sanctions relief.

The Russian threat, hours after the latest negotiating round ended, appeared to catch Washington off guard.

Perhaps the most significant evidence that Ryobkov was merely jerking Washington’s chain can be seen in how his tone remains entirely positive about the P5+1 talks in comments carried today by PressTV, even stating that the current timetable for reaching a final agreement appears to still be on track:

“We have progressed quite well, the atmosphere is very good, and the work is business-like and result-oriented,” Russian Deputy Foreign Minister Sergei Ryabkov said in a telephone interview with Russia’s Interfax news agency from the Austrian capital of Vienna on Thursday.

“But saying that we have the outlines of an agreement now would be encroaching upon the truth. There are none,” he added.

Referring to a late-July deadline that was set in November last year between Tehran and the six nations for a final nuclear agreement, Ryabkov said, “I don’t see any reasons to say that this deadline could be shifted and that this schedule is becoming unrealizable. There are no reasons for this so far.”

At least Jahn also reported that it appears that Iran is leaning toward a re-engineering of the Arak reactor so that it will produce less plutonium. This would lessen concerns about the reactor while still allowing it to move into use to replace the aging Tehran research reactor in producing medical isotopes.

At any rate, with several weeks to go before the next round of P5+1 talks, there is plenty of time for Ryobkov’s “warning” over sanctions in response to the Crimean situation to play itself out.  Considering that we have reports now that Syria has gotten almost to the 50% mark in removal of its chemical weapons-related materials, its seems likely that Russsia is still committed to its nonproliferation stance for chemical and nuclear weapons despite the disputes it has with the West on other issues.