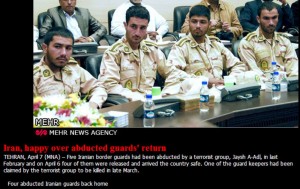 Complicating matters even further, Al Monitor reports that no video or photo has appeared to confirm Danaeifar’s death and that Jeish Al-Adl has even removed their claim of killing him from their website:

Of the five guards kidnapped, one, Jamshid Danaeifar, was reportedly killed. However, his body has not been returned and the announcement of of his killing on the the Jaish al-Adl website has been taken down. He was the only regular army serviceman of the group. The other four are conscripts. Military service is mandatory for Iranian men.

Commander of the Iranian Border Guard Units General Hossein Zolfaqari told reporters April 6, “Based on Jaish al-Adl’s statements, [Danaeifar] was martyred. But no reason, proof or document … of his martyrdom has been shown to us. No film or body … has been presented.” Zolfaqari said that Danaeifar was separated from the other guards approximately a month ago, and the group claims its is unable to deliver his body.

The fact that Danaeifar was separated from the other four guards long before the claim that he had been killed accounts for why the four can shed no light on Danaeifar’s fate.

Meanwhile, we learn that Pakistan has taken action against “separatists” in Baluchistan, killing 30. It is not clear whether Jeish Al-Adl was among those targeted, but the location and aim of the group would be consistent with them. Such action by Pakistan will, of course, find favor in Iran, as the same separatist cause is active on the Iranian side of the border in the same region. Further Iran-Pakistan cooperation is seen in the start today of a joint naval drill involving the two countries.

Lest we think that Iran and Pakistan have patched up all differences, though, there was yet another twist in the border guard story while I was writing this post. The following story (with an Islamabad dateline) was just put up by the Express Tribune:

A senior official on Monday denied Iranian claims that its border guards, who were abducted by Jaishul Adl militant group, were released in Pakistan.

“According to our information, the Iranian border guards were released after Iran freed 8 members of the Jaishul Adl from Zahedan jail,” said the official while requesting anonymity. “The exchange took place on the Iranian soil,” the official said, adding that Tehran was deliberately trying to ‘externalise’ its own domestic problem.

The official said Pakistan extended full cooperation to the Iranian authorities to recover the abducted guards but could not find any evidence suggesting they were brought into the country.

Recall that when Jeish Al-Adl announced that it had killed Danaeifar, it had issued a call for release of some its members held by Iran or another guard would be killed. Pakistan had denied from the start that the guards were inside Pakistan. This latest twist is very interesting in light of this claim on Saturday from Iran:

The Pakistan-based Jeish Al-Adl terrorist group is working on a new scenario to transfer the body of the slain Iranian border guard, Jamshid Danayee-Far, to Iran through smugglers, informed sources said on Saturday.

“Jeish Al-Adl intends to transfer the body of this martyr to Iran through smugglers in a bid to claim that he has not been killed in Pakistan,” an informed source told FNA on Saturday.

Regarding the issue of where the guards were held, the Al Monitor story linked above links to a site with photos purporting to show the guards as they were crossing the mountains from Pakistan back into Iran. That post is not in English (and the English version of the story is only a short summary), but from a quick glance at the photos, it seems to me that it would be very difficult to prove conclusively just where the photos were taken in relation to the Iran-Pakistan border.

It would seem that the issue of Danaeifar’s fate is far from resolved. I will keep an eye on developments.