Pat Tillman Was A Man, Not Just A Symbol 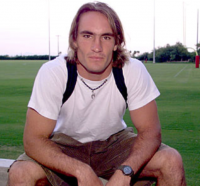 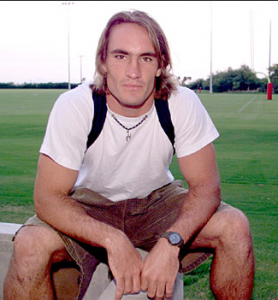 As you probably know by now, yesterday was the tenth anniversary of the death of Pat Tillman. The media has been replete with stories, remembrances, tributes and the like from the sad tale of a fellow Army Ranger who lives with the fear it was he who shot Pat, to calls for Pat to be in the Pro Football Hall of Fame, to Dave Zirin’s renewed questions on the events surrounding Pat’s death and many others.

To be honest, I have mixed emotions about it all. It is fantastic Pat Tillman is so fondly and deeply remembered, but at the same time, it stirs negative emotions from how much Pat became a symbol, first for the pro war crowd, and then the anti-war crowd upon his death. The Pat Tillman I knew would have been more than uncomfortable with both and, similarly, uncomfortable with much of the hagiography over the last couple of days.

For these reasons, I vacillated with whether to join in the fray; part of me just felt uneasy with it all despite my respect for Pat. In fact, it is my deep respect for Pat that gave me pause. But there is another side of Pat Tillman that really needs more emphasis.

The article I most suggest is a long and beautiful piece in The Arizona Republic centered on Marie Tillman, Pat’s long time love and, now, widow. Marie talks a lot about Pat the man, their growing up together in California, move to Arizona, and how she has come to both accept, and at the same time move on in peace from, Pat’s death. It is really beautiful, please read it.

As Marie Tillman wants to focus on who Pat Tillman the person was, so too do I. Back on the day the Phoenix Cardinals played the Pittsburgh Steelers in the Super Bowl, on February 1, 2009, we did a post here at Emptywheel entitled “Pat Tillman’s Super Bowl”. The first part was by Marcy and was a great discussion of the problems and questions with the government’s conduct after Pat’s death, and I suggest you read that.

The second part of “Pat Tillman’s Super Bowl” was written by me and was exactly what I am trying to convey today: Pat was a man, not just a symbol. He stood for so much that is good as a human, and that seems to get lost in all the rah rah symbolism and martyrdom. I cannot say it better than I did then, so I am going to reprint that portion here in this post:

Earlier this morning, Marcy posted this serious and wonderful piece on Pat Tillman, and the Super Bowl he is missing. Unfortunately, it has turned somewhat, and predictably, into a knock down drag out on conspiracy theories and acts, I would like to return for a moment to the subject of her post, namely who Pat was, and what he did, which is why the answers his family seeks are so important in the first place.

First off, Pat gave up a large contract with the Cardinals to join the Army after 9/11. That is well known and part of the lore. What you should also know is that the contract offer could have been much bigger than that, but Pat was willing to take less money than he was worth on the open market to stay with the Cardinals because he believed in their redemption and he loved the community of Tempe and Phoenix. He had grown roots here from his four years at Arizona State and was determined to see the Cardinals through the transformation into a winning team. The contract he walked away from with the Cardinals was for about 3.6 million; he had turned down previously a 9 million dollar multi-year contract with the St. Louis Rams, right in the middle of their Super Bowl years, in order to stay with and build the Cardinals in what he considered to be his home at the time. That is the kind of man that Pat was.

Pat didn’t give a damn about money and the trappings of celebrity. Years after already being a high paid and wealthy NFL star, you would still find Pat traversing the streets of Tempe on his bicycle, looking like a hippy with his long hair and book bag. This was literally how he would go to work every day at the Cardinals training center in South Tempe. Pat was an avid reader. Of everything. He loved politics and world events, and there was nothing he loved more than spirited discussion of the same, whether it was current events, WW II, or ancient European battles. And he could discuss all intelligently, deeply and passionately. Pat knew business and marketing as well, that was his major at ASU and he was brilliant at how he understood, and could see through, the forces at work in our economy.

Pat was an iconoclast. He was his own man and would back down from nothing, and no one, if he thought he was right. This is what made him an odd fit for the military. He had every ounce of the heroism, valor, trust and honesty that the military has always purported to stand for, and then some. But he was not a yes man and was trained, from my estimation since birth, to question authority, especially if it was malignant and wrong. I believe this may have caused a rougher ride for him in the military than most would have expected, or would suspect even now, from the outside, and almost certainly played a huge role in how his death was handled, irrespective of how his death occurred. LabDancer spoke the word in comments:

Pat’s death was caused by our side; our side covered that up, employing things our side knew were untrue; our side used that same cover to distort, turn and pervert the story of his death into a symbol aimed at promoting a falsehood: that Pat died pursuing a myth our side knew for a fact he’d personally determined beforehand to be a lie – meaning that, in end, our side rendered an obscenity from Pat’s death. That’s more than enough to earn him the status emptywheel submits as his due.

That is right on the money. It is also what motivated me to write this, the use of Pat is, at this point, not just by the Bush Administration for their glory, but by the contra for theirs as well. From being a player who loved football as a game, Pat has become the football in the game. That is wrong, very very wrong.

As you may surmise here, or as some may recall from discussions at The Next Hurrah long ago, I had the privilege of knowing Pat Tillman a little. I did not know him well, but well enough to get the measure of the man he was. I used to live a little less than a mile from the Cardinals headquarters and practice facility in South Tempe. On days when I worked at home, I used to ride my bicycle to a little deli, Capistrano’s, between my house and the Card’s facility. It was there that I met Pat, who also stopped in on his bicycle, and had a few long lunch conversations with him. He was everything he has been made out to be and more. He was twenty years younger than I, but you would never know it. He was such a deep and diverse thinker that he was almost the antithesis to the world as we currently know it.

The nation, and the world, lost a lot with Pat Tillman’s death. When we talk about the type of people we need to foster and grow to lead into the future, he was a prime example. That, to me, is why his loss stings, and lingers, so deeply. Pat’s family, the nation, and the world deserve the answers to what happened, it is, and remains, important.

But, above and beyond all else, what people should be taking away is not the dickering over the mechanism and coverup of his death, although that is important; but more importantly, the facts and honor of his life, beliefs and hopes. Honor and fight what he stood for, and what he wanted the country to stand for, that is what he would want.

Pat Tillman was quite a guy. He learned, and lived, a lot in his all too short stay on this earth. He was so much more than the football and war hero, and symbol, that has comprised most of the remembrances on this tenth anniversary of his death.

Pat Tillman had a love for life, for his wife Marie, for literature, and for all knowledge he could possibly absorb, and he could absorb a lot. He was a critical thinker. And he was a great guy. Let him be remembered, and honored as a role model, for that too. RIP.