Big NSA Funding Recipient, Ethiopia, Spies on Journalists in US 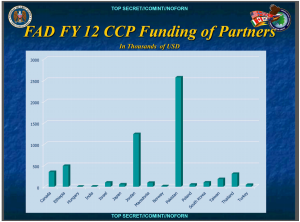 Along with the release of his book today, Glenn Greenwald has released a stash of documents, many of them new. One of them PDF 39) shows how much funding NSA gives some of its international partners.

The amounts involved aren’t huge — even Pakistan, the leading recipient, gets just $2.5 million, and most recipients get far less.

But Ethiopia is third on the list, receiving somewhere around $450,000. Not a ton, but not chicken scratch, either. Presumably, much of that targets Somalia.

Still, I think it significant, given that Ethiopia is getting sued in the US for spying on journalists based in the US.

A Washington area man with ties to Ethiopia’s political opposition sued that country’s government in federal court Tuesday, alleging that agents had used powerful spyware to hack into his computer and snoop on his private communications for more than four months.

The suit says that forensics experts found more than 2,000 files related to a spyware program called FinSpy, including evidence that it had accessed the plaintiff’s Skype calls, e-mails and Web-browsing history in violation of U.S. wiretapping laws.

The case is the latest sign that the government of Ethi­o­pia, an American ally with a history of repressing political opponents, journalists and human rights activists, has used sophisticated Internet technology to monitor its perceived enemies, even when they are in other countries.

“The Ethio­pian government appears to be doing everything it can to spy on members of the diaspora, especially those in contact with opposition groups,” said Nate Cardozo, a staff attorney for the Electronic Frontier Foundation, a civil liberties group based in San Francisco that prepared the suit.

I imagine working closely with the NSA teaches you a lot about how better to target its dissidents overseas.