The Carnage In Isla Vista, Hashtag Justice and Echidne 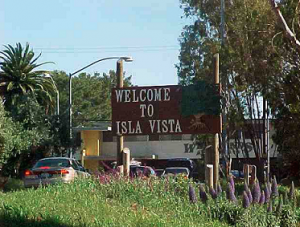 I have not been there in a while, but I have been there quite a bit before, and the Isla Vista/Goleta area surrounding UCSB is everything good and bad that surrounds any major university. It is a melting pot teeming with brilliant young minds, eager to expand and ready to experiment and socialize. It is also cliquish and too easy to separate the in from the out crowd and, sometimes, rich from poor. Above all else, at least from my visits there when I was younger, IV was one wild party that could be anywhere along a couple of key streets, if not indeed out in the streets themselves. It was one hell of a good time.

But not this Memorial Day weekend. Something different and jolting happened, leaving seven souls dead, seven more injured and yet another community, and national audience, grieving and reaching for answers.

I don’t know what the answers are, and to a great extent, I do not think the pathology of this incident is yet ripe enough to draw them with any real definition. That has not, of course, stopped the light speed social justice court of Twitter and the internet.

The reaction on Twitter has run the spectrum from sober to hysterical. If you are on Twitter, you have seen it, if you are not, it is not hard to imagine if you are internet savvy enough to be reading the instant post. Speaking only for myself, however, I have been a little disturbed by the alacrity with which valuable social justice movements, and their participants, have glommed on to a tragic spree crime as the defining vehicle for their arguments, whether it be women’s rights, gun control or otherwise.

It strikes me, while certainly all of these things figure into the Rodger situation to some extent, hitching up to a spree murder by a mentally disturbed individual is not exactly a great vehicle for your social justice movement. It is more complex than that, and it is too easy in haste to mistake manifestations for root causes. Post hoc, ergo propter hoc if you will.

And, while I know the intent was good, I have found the “hashtag advocacy” via such tags as #YesAllWomen, and the reflexively responsive #NotAllMen, to not necessarily do all that much to further the well meaning intention of their adopters. While some of those tweets have seemed germane and helpful, a great many seem

counterproductive. It is unlikely the battle over misogyny will be won by pitting intelligent men and women against each other, even rhetorically. That’s just my thought, and I may be wrong in how I am seeing this. But there you have it. I’d rather see this discussion had under more sober terms and not hitched to a psychotic spree homicide.

Which leaves us to the last item in the title to this post. For all the, in too many instances, emotional, aggressive and wrongheaded discussion in the Rodger aftermath, one article has struck me as pretty remarkable for its reflection and view. It is by Echidne and, in discussing how different people read different things into the Rodger scenario, she says:

These are of the expected type and often reflect the writer’s position on the political map. That Rodger had access to semi-automatic weapons made him a very efficient killing machine. That he suffered from clear mental problems was also pointed out. That he was a misogynist of rather extreme nature is given at least a nod in most places (though at least one writer disagrees on that as the cause for the massacre). Whether he indeed was “a madman,” in the sense of an isolated, impossible-to-prevent-but-horrific event or whether something could have been done to prevent the massacre also seems to depend on one’s general slant about such things.
…..
This has been a difficult post to write, a difficult post to write in the correct tone, a difficult post even to think about. And I have failed in finding the correct tone, failed in the distance I should have had, perhaps failed on the side of cold and hard anger myself. The victims of the massacre deserve my focus, not its perpetrator, and even though I justify my writing about the perpetrator as a search for greater understanding I’m not sure that I achieved that.

Yes, Rodger was a troubled individual with severe problems. Yes, he managed to slip through the police net, yes, he was able to buy three semi-automatic guns, apparently with no questions asked.

Perhaps all that is the framework, the flow-chart of what happened.

I think the above quotes are spot on, but are merely a taste of the fantastic discussion and analysis in Echidne’s piece. It is required reading in full, and it contains a superb background and synopsis of Rodger’s manifesto. It properly and fully draws in the the glaring issue of misogyny and degradation of women without making it a means unto itself without a nod to the underlying issues that may trigger it.

Rodger’s psychoses look like they go far deeper than just misogyny, though there is obviously an abundance of that. And it strikes me, very much, the real complexity behind this is being lost in the screaming hashtag rush to peg it as the vehicle for discussion of all things misogyny and mistreatment of women. Such is a huge component to be sure, and ought be discussed, but there seems to be a lot more going on too. Echidne lays a lot of that out quite well, and her struggle in doing so displays why this is such a tough situation to peg in such simplistic terms as I have been witnessing, on twitter and the net, for the last two days.