Jason Leopold has a new article at the Guardian based off a FOIA of NSA’s FOIA process. Perhaps the funniest part of the documents he received, however, is the number of times the NSA claimed its own discussion of FOIA process — including praise for the FOIA responders! — was Top Secret, suggesting revealing details would cause exceptionally grave harm to national security. 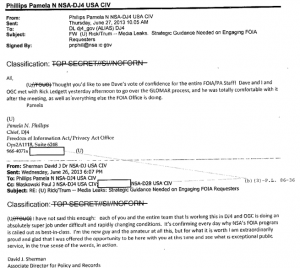 That said, I think there’s a missing piece to this puzzle (and hope Leopold pursues it when he makes his inevitable appeal of some of these redaction decisions).

On June 11, NSA’s Chief of FOIA Office Pamela Phillips raised the possibility of having “a paper or sheet of unclassified facts that could be provided to the public.” (See PDF 1) She repeated that request on June 17. (See PDF 3) I believe that is separate from the efforts to come up with a standard Glomar letter (that discussion, incidentally, is redacted in some enormously interesting ways).

But I’m particularly interested in a redaction in an email from Deputy Chief of Staff Trumbull Soule to Associate Director for Policy and Records David Sherman and then Media Leaks Task Force head and now Deputy Director of NSA Richard Ledgett, and cc’ed to Phillips and (among at least 12 others) NSA General Counsel Raj De on June 26.

That’s because that email got sent on the day after the NSA had to pull what I believe was that unclassified fact sheet, which NSA first posted on June 18, after Ron Wyden and Mark Udall wrote a letter, on June 24, to Keith Alexander noting two problems with the letter, in that it misleadingly suggested,

In addition, the letter had a classified attachment that, I suspect, noted that John Bates’ response to the upstream problems did not require the destruction of entirely domestic communications.

NSA withdrew the fact sheet from its website sometime before 1 PM on June 25.

Now, it may just be a coinkydink that the highest level of discussion among these emails come on that particular day (though I assume NSA withheld a bunch of emails). But I do find the timing rather interesting.