Targeting Terrorists Based on Their (?!?) Sorority Membership 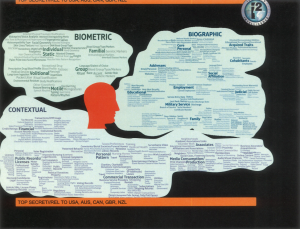 As part of my continuing obsession with the way NSA tracks identities, I wanted to take a close look at one slide released by the NYT with its facial recognition story the other day. It tracks all the kinds of data the NSA and its Five Eyes partners try to collect on targets (and I’m sure they aspire to this level of detail primarily with targets).

It’s useful because it offers a list of the kinds of financial records the NSA might use. These range from Hawalas and farm cooperatives to scholarships, retirement accounts, and health/medical accounts.

At one level, these record types are uninteresting. Journalists search out some of the same information to do their reporting. Of course, the NSA has more legal authority to obtain these records.

And perhaps that’s the mindset that led to the sheer diversity of types of targets envisioned in this slide. Perhaps whatever contractor made it works largely for corporate clients and most of the categories came from an existing presentation or experience base.

Still. I was rather amused that a dragnet the US largely justifies in the name of counterterrorism includes sorority membership among the identity characteristics they collect.

It’s not entirely inconceivable that an NSA target would be a sorority member (she could work for a targeted company, after all). It’s just so far down the realm of likelihood that I can’t imagine NSA tracking someone’s sorority — unless their targeting were far broader than they claim.