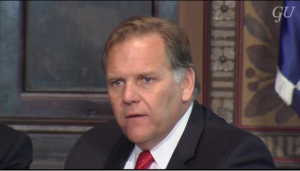 Josh Gerstein already wrote about some of this Mike Rogers blather. But I wanted to transcribe the whole thing to display how utterly full of shit he is.

At a conference at Georgetown the other day, (see video 3), Rogers laid into the tech companies for opposing USA Freedumber, which he badly misrepresented just before this. The context of European opportunism beings at 1:06, the quote begins after 1:08.

We should be very mad at Google, and Microsoft, and Facebook, because they’re doing a very interesting, and I think, very dangerous thing. They’ve come out and said, “well, we oppose this new FISA bill because it doesn’t go far enough.” When you peel that onion back a little bit, and why are you doing this, this is a good bill, it’s safe, bipartisan, it’s rational, it meets all the requirements for Fourth Amendment protection, privacy protection, and allowing the system to work,

Rogers claims they’re doing so solely because they’re afraid to lose European business. And Rogers — a Republican! — is furious that corporations prioritize their profits (note, Rogers has never complained that some of these same companies use European tax shelters to cheat the tax man).

And they say, “well, we have to do this because we have to make sure we don’t lose our European business.” I don’t know about the rest of you, that offends me from the word, “European business.” Think about what they’re doing. They’re willing, in their minds, to justify the importance of their next quarter’s earnings in Europe, versus the National Security of the United States. Everybody on those boards should be embarrassed, and their CEOs should be embarrassed, and their stockholders should be embarrassed.That one quarter cannot be worth the National Security of the United States for the next 10 generations. And if we don’t get this part turned around very quickly, it will likely get a little ugly, and that emotional piece that we got by is going to be right back in the center of the room to no good advantage to our ability to protect the United States.

Mostly, he seems pissed because he knows the collective weight of the tech companies may give those of us trying to defeat USA Freedumber a fighting chance, which is what Rogers considers an emotional place because Democracy.

But Rogers’ rant gets truly bizarre later in the same video (after 1:23) where he explains what the security interest is:

We have one particular financial institution that clears, somewhere about $7 trillion dollars in global financial transactions every single day. Imagine if tomorrow that place gets in there and through an attack of which we know does exist, the potential does exist where the information is destroyed and manipulated, now you don’t know who owes what money, some of that may have lost transactions completely forever, imagine what that does to the economy, $7 trillion. Gone — right? Gone. It’s that serious.

Mind you, Rogers appears unaware that a banks shuffling of money — while an incredibly ripe target for hackers — does not really contribute to the American economy. This kind of daily volume is churn that only the very very rich benefit from. And one big reason it’s a target is because it is an inherently fragile thing.

To make all this even more hysterical, Rogers talks about risk driving insurance driving proper defensive measures from the target companies … yet he seems not to apply those rules to banks.

Mike Rogers, it seems, would rather kill Google’s business than permit this rickety vitality killing bank to feel the full brunt of the risk of its own business model.