Because I was away on an extended family trip ending last week, I was unable to comment on Pakistan launching a full-blown military operation in North Waziristan. Many had long held the view that such action would never be undertaken, but it would seem that terrorist attacks in several locations around Pakistan at a time when the government was attempting to hold peace talks with the Taliban finally provoked military action. Dawn provides this interactive map of major events so far. As you mouse over the map, blue circles are air strikes, green circles are ground attacks and red circles are drone strikes. Details should pop up at each circle: 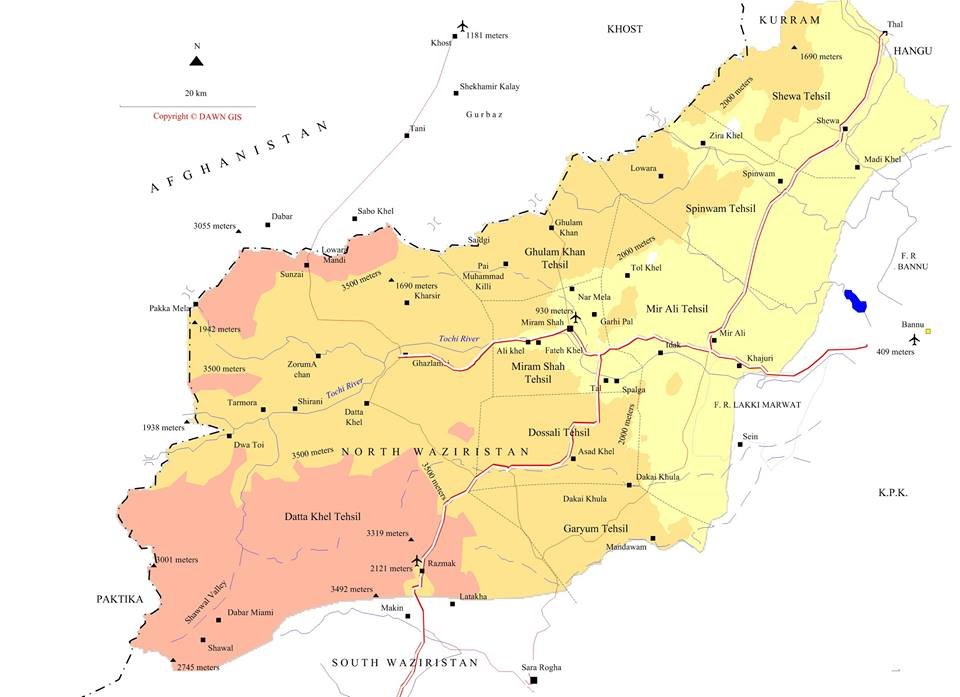 The operation is named Zarb-e-Azb. In the Express Tribune’s summary of the actions, we get this translation of the name:

The meaning of Zarb-e-Azb is sharp and cutting. It’s reportedly the sword used by Prophet Muhammad (pbuh) in the battle of Badar.

“DG ISPR has said that on the directions of the Government, Armed forces of Pakistan have launched a comprehensive operation against foreign and local terrorists who are hiding in sanctuaries in North Waziristan Agency. The operation has been named Zarb-e-Azb,” said the press release.

The ISPR statement went on to add that terrorists in North Waziristan had waged a war against the state of Pakistan and had been disrupting life in all its dimensions, stunting our economic growth and causing enormous loss of life and property. “They had also paralysed life within the agency and had perpetually terrorised the entire peace loving and patriotic local population,” the statement added.

“Our valiant armed forces have been tasked to eliminate these terrorists regardless of hue and colour, along with their sanctuaries. With the support of the entire nation, and in coordination with other state institutions and Law Enforcement Agencies, these enemies of the state will be denied space anywhere across the country. As always, armed forces of Pakistan will not hesitate in rendering any sacrifice for the motherland,” said the statement.

The operation has included air strikes by Pakistan’s air force along with ground action. Notably, there also have been at least three US drone strikes apparently coordinated with the offensive.

Remarkably, Pakistan’s Foreign Office is warning diplomats in Karachi to be on guard and to restrict their movements. Although the warning does not appear to mention a link to the action in North Waziristan, it seems likely that the military action is seen as contributing to increased risk of terror attacks across the country.

As might be expected, the military action has precipitated a huge spike in internally displaced people. Since those displaced are coming from the region where radical groups have disrupted vaccination plans, there is concern that polio will be spreading as residents are displaced. However, officials are making the best of a bad situation and are using the movement of families as an opportunity to vaccinate children as they cross checkpoints:

On the one hand, the movement of internally displaced persons (IDPs) from North Waziristan Agency provides officials an opportunity to vaccinate children who were inaccessible to health workers since June 2012, on the other hand, there are concerns that the virus could spread with the movement of these children.

These fears are exacerbated by the fact that the movement is taking place during the summer season, a high transmission season for the poliovirus.

Speaking with The Express Tribune, Acting Country Head of World Health (WHO) in Pakistan Dr Nima Saeed Abid said all efforts are being made to vaccinate children from Waziristan at checkpoints set up for IDPs.

So far a total of 221,253 children have been vaccinated against polio at check posts set up, according to the Prime Minister’s Polio Monitoring and Coordination Cell.

I will try to keep an eye on developments in this operation but will be traveling again next week.

Postscript: While this post was being written, Pakistan announced that the Haqqani Network is among the targets of the offensive but that the offensive is Pakistan’s alone rather than a joint US-Pakistan action. How can US drone strikes be part of a Pakistan-only offensive? It also should be noted that the military is providing death toll information for “terrorists” and soldiers but does not mention civilian deaths.