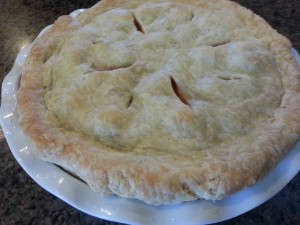 I’m heading out to Ann Arbor for festivities today, and I may well leave the laptop home…

I was going to wax politic about our Constitution. And oh, what the heck — why not quote from the end of John Roberts’ decision in Riley v. California (even if he doesn’t believe the Fourth Amendment extends to women’s uteri) — for a reminder of how we got here.

Our cases have recognized that the Fourth Amendment was the founding generation’s response to the reviled “general warrants” and “writs of assistance” of the colonial era, which allowed British officers to rummage through homes in an unrestrained search for evidence of criminal activity. Opposition to such searches was in fact one of thedriving forces behind the Revolution itself. In 1761, the patriot James Otis delivered a speech in Boston denouncing the use of writs of assistance. A young John Adams was there, and he would later write that “[e]very man of a crowded audience appeared to me to go away, as I did, ready to take arms against writs of assistance.” 10 Works of John Adams 247–248 (C. Adams ed. 1856). According to Adams, Otis’s speech was “the first scene of the first act of opposition to the arbitrary claims of Great Britain. Then and there the child Independence was born.” Id., at 248 (quoted in Boyd v. United States, 116 U. S. 616, 625 (1886)).

May we renew James Otis’ fight as we go forward.

But I wanted instead to express my gratitude to several people, who have already made my Fourth. First, the guy collecting cans for deposits who I often see as I walk McCaffrey the MilleniaLab in the early morning. He was the first to wish me a — shouting across the street, in joyous whoops — a Happy Fourth this morning, which gave me great joy. This day belongs to all Americans — may we remember that common purpose and start serving it for all to benefit.

And I especially want to thank the West Michigan farmers who made it to the Farmer’s Market this morning. Not only does that mean we’ll be having strawberry-rhubarb and (the first of the season) cherry pies at our barbecue this evening. But the farmers who picked their first crop of blueberries last night to have them for today will make the kids at the barbecue very happy.

A safe and joyous Fourth to all emptywheel’s readers!