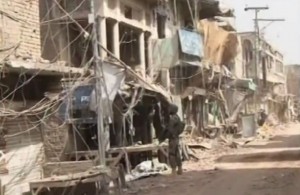 Screengrab from Express Tribune video of Miramshah on July 10, 2014

Today, Pakistan’s military escorted selected members of the media through Miramshah, which had been ground zero for militants in Pakistan’s North Waziristan and the focus of the heaviest fighting in the Zarb-e-Azb offensive undertaken by the military last month. From the video provided in the Express Tribune story on Miramshah, it is clear that the town is essentially deserted and most buildings appear to be heavily damaged.

The offensive is taking a huge toll on Pakistan. Depending on the source cited, there are either 787,000 or 833,274 people who have been displaced from North Waziristan. Those are truly remarkable numbers, as the linked Washington Post article notes that previous estimates of the population of North Waziristan were only 600,000, so it is clear that virtually all citizens have left the region.

Because the media have been banned from the region before today, Pakistan’s military has controlled the flow of information. The latest claims I can find put the death toll at 400 militants and 20 soldiers. No information on civilian deaths has been released and the military claimed that the civilian death toll was zero even after over 200 militants were said to have been killed.

One of the most remarkable stories to emerge along with those who have fled Miramshah is that of Azam Khan, who was a barber in Miramshah:

Azam Khan was one of the top barbers in Miranshah — the main town of North Waziristan — until he, like nearly half a million others, fled the long-awaited offensive unleashed by the Pakistan military on the tribal area in June.

He told AFP his business boomed in the month leading up to the army assault as the militants sought to shed their distinctive long-haired, bearded look.

“I have trimmed the hair and beards of more than 700 local and Uzbek militants ahead of the security forces’ operation,” he said while cutting hair in a shop in Bannu, the town where most civilians fled.

For years he cut Taliban commanders’ hair to match the flowing locks of former Tehreek-e-Taliban Pakistan (TTP) leader Hakimullah Mehsud, killed by a US drone last November, but in May a change in style was called for.

“The same leaders came asking for trimming their beards and hair very short, saying that they were going to the Gulf and wanted to avoid problems at Pakistani airports,” Khan said.

It would seem that there is now a good chance that the real targets of this offensive left before it even began. All citizens of the region have been displaced and most buildings have been rendered useless, only to kill the low level forces who were left behind because they didn’t have the resources to flee along with their leaders.

tweets from our circle
bmaz ( @[email protected] )@bmazRT @MichaelWarbur17: In 2006 a high school English teacher asked students to write to a famous author & ask for advice. Kurt Vonnegut was…14 minutes ago28 January 2023
bmaz ( @[email protected] )@bmazRT @JonnyRoot_: Charles Barkley seemingly ROASTS Biden & his supporters and then flips the script 🙄 "We let the fans vote. Look what happe…18 minutes ago28 January 2023
bmaz ( @[email protected] )@bmazWhen you get high on your own supply: pic.twitter.com/uyIi63OD7Q21 minutes ago28 January 2023
emptywheel@emptywheelThe man who cast the deciding vote for the man 2nd in line for the presidency is in serious legal jeopardy for the… twitter.com/i/web/status/1…10 hours ago28 January 2023
Ed Walker 🍞🌹💉💉@MasaccioEWRT @mhdksafa: Once upon a time, in the 50s, a family could own a home, a car, send the kids to college, and vacation to enjoy life, all on…13 hours ago28 January 2023
Ed Walker 🍞🌹💉💉@MasaccioEWDaily Cartoon: Friday, January 27th newyorker.com/cartoons/daily…20 hours ago27 January 2023
Ed Walker 🍞🌹💉💉@MasaccioEWRT @HeidiReports: We are watching an 80-year-old man get bludgeoned with a hammer (inc. his blood pooling on the floor) because our "politi…24 hours ago27 January 2023
emptywheel@emptywheelSeeing a lot of people say the NYT Durham story shows that Barr was much more corrupt than we know. Nope. He did t… twitter.com/i/web/status/1…1 day ago27 January 2023
emptywheel@emptywheelThis actually gets the order wrong. The Durham investigation was the Mark Meadows investigation given prosecutoria… twitter.com/i/web/status/1…1 day ago27 January 2023
Jim White@JimWhiteGNVRT @jmcin9: “UF is the wokest public university in Florida” Hey, finally a decent Number 1.4 days ago24 January 2023
Jim White@JimWhiteGNVRT @TheBWSTimes: Imagine a newsroom full of Black journalists working in Greenwood/Black Wall Street 101 years after the 1921 Tulsa Race Ma…1 week ago18 January 2023
Jim White@JimWhiteGNVElmo throttled this. I wonder why… twitter.com/JimWhiteGNV/st…1 week ago18 January 2023
Colleen McMahon Kicks the Administration’s Ass NSA Only Finds 59% of Its Targeting of US Persons
Scroll to top