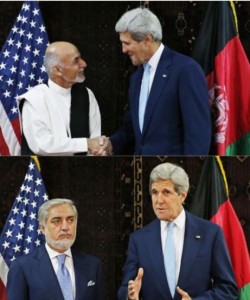 Two photos from Reuters today sum up the status of the Afghan presidential election. Ghani appears confident and ready to work with Kerry, while Abdullah gives Kerry the side eye.

Three short weeks from tomorrow marks the date on which Afghanistan’s new president is to be sworn in. The problem, though, is that Abdullah Abdullah refuses to believe that he could have beaten Ashraf Ghani by a million votes in the first round and then lost to him by a million votes in the runoff a few weeks later. Both US Secretary of State John Kerry and the UN have tried to defuse the crisis, but neither effort has had any effect whatsoever.

No words are needed to describe Kerry’s failure. In their story on Kerry’s visit to Kabul today, Reuters carried photos of Ghani and Abdullah with Kerry in front of the same backdrop of US and Afghan flags. The photo of Ghani and Kerry could pass as a propaganda photo handed out jointly by the two governments to promote a continued relationship between the US and Afghanistan with Ghani as the new president. The photo with Abdullah, on the other hand, shows a deeply distrustful Abdullah casting a sideways glance at Kerry, who seems not to have the courage to look Abdullah in the eye, let alone shake hands as he did with Ghani. Perhaps Abdullah and Kerry did shake hands, but photographer Jim Bourg seems to have captured the essence of the crisis perfectly.

Meanwhile, the UN proposal for additional auditing has fallen flat. From the New York Times:

The United Nations proposal centered on a special audit of suspected fraudulent votes, and it appeared to be a winner when the office of President Hamid Karzai called reporters shortly after midnight Friday, the beginning of the Afghan weekend, to spread the news of the new plan.

Aimal Faizi, the spokesman for Mr. Karzai, said the president was backing the proposal, which involved a deeper audit of votes from 8,000 polling stations, or about 43 percent of the 8.1 million ballots cast. The plan had been presented to Mr. Karzai on Thursday evening by Jan Kubis, the special United Nations envoy for Afghanistan, who was to brief Mr. Abdullah and Mr. Ghani about it later on Friday, Mr. Faizi said.

But within minutes, Mr. Abdullah’s campaign said it had already made clear to United Nations officials that the plan was not acceptable during discussions on Thursday about possible ways out of the crisis. A senior aide to Mr. Abdullah said the campaign had its own plan, which would entail audits of votes from about 11,000 of the roughly 22,000 polling stations.

Western reports on the election crisis that I have read have danced around a very important central issue without ever addressing it. The huge problem that Afghanistan faces is that there is no real way to audit this election after the fact. Elections in Afghanistan do not take place in the way that elections in the West are conducted. Once outside of Kabul, Afghan society is structured around village life and women often live their entire lives without going outside the walls of the family compound. Village elders carry huge influence for all residents of the village.

In his book No Good Men Among the Living, Anand Gopal provided a couple of very informative vignettes of previous presidential elections. On page 156, we have this from the 2004 election:

By sunrise they arrived at the polling center, the main schoolhouse. A curtain down the middle of the compound separated the male and female voters. As Heela proceeded to her section, she could see a crowd of men gathering near the gate a good hour before the polls opened. She helped erect the booths and gather the documents, and then the gates opened and people rushed in. Khas Uruzgan’s sunburned farmers flashed toothy smiles and waved to UN photographers as they presented their registration cards and dipped a finger in purple ink to prevent multiple voting.

On Heela’s side, however, the story was starkly different. “I didn’t see a single woman vote,” Heela said. “I was the first and last woman to cast a ballot that day.” At one point, men arrived with sack loads of registration cards. “They told me, ‘The women in our village don’t know anything about politics, so they asked us to vote for them.'”

Keep in mind also that there is virtually no way to verify a registration card since many Afghans have no birth certificate.

Things were hardly improved by the 2009 election. From page 261:

The campaign office was situated on the ground floor of a large house in central Tirin Kot. Photographs of Karzai with various tribal elders adorned the walls, and an American flag hung in one corner. Heela’s days became a blur of appointments with election workers and Karzai boosters and government officials checking on the work. The goal was to ensure that women cast ballots, or, even better, that their husbands did so on their behalf. The men in the office performed the valuable work of liaising with the village elders and maleks, for whom a vote was not an exercise of democracy but a down payment on access, an effort to ensure that the right people were in power when the time came to call in a favor. So votes typically came in blocks, and it wasn’t unusual for a village to report 90 percent support for a single candidate.

The real problem, as Heela and her colleagues quickly realized, was that with so little of the countryside under government control, only a few villages would vote on election day. A Taliban campaign to intimidate potential voters was already in full swing, which meant the campaign staff would need to get creative to avoid the embarrassment of a minuscule turnout. Arrangements were made with the maleks province-wide to return full ballot boxes by whatever means they saw fit.

Just how would one go about auditing these boxes full of ballots?