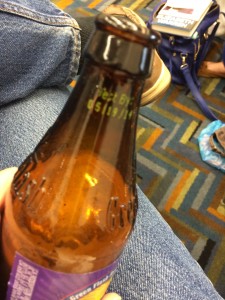 So far, I have suffered no ill effects from this outdated beer.

Aside from the fact that the only craft beer served at the National Security Caucus session at Netroots Nation 2014 was an outdated California beer rather than a local Michigan beer, it was a session marked by interesting discussion. I received quite a bit of support during that discussion for noting that the US response to any crisis anywhere, for far too long, has been simply to ask “Which group should we arm?”. Further, I noted, as we had heard in the “Iran: Diplomacy or War?” session, there is reason for optimism among those of us who favor diplomacy over violence in the successful removal and ongoing destruction of Syria’s chemical weapons rather than the missile strikes the US had been planning and in the remaining strong possibility of a diplomatic solution to the Iran nuclear technology issue instead of a war to destroy the technology. I illustrated that point by mentioning the tragic downing of MH17 and how that demonstrated the folly of training and arming rebel groups that often veer into extremist actions that result in atrocities. That point ties to the mad push to arm Syria’s rebels with the shorter range MANPAD antiaircraft missiles even though they are less powerful than the Buk missile that took down MH17. As I noted, will Syrian “moderates” promise us never to take the MANPADS to a site where civilian aircraft are within range, and would there be any reason to believe such a promise?

In executing his Full Ginsburg yesterday, US Secretary of State John Kerry reached new heights of hypocrisy, as he went from Sunday morning talk show to talk show, proclaiming the evils of Russian actions in Ukraine. The evils for which Kerry is castigating Putin are precisely the evils that the US has been unleashing on the world in places like Iraq, Afghanistan, Yemen, Syria and beyond. From today’s New York Times:

In presenting the most detailed case yet alleging Russia’s involvement in the Ukraine crisis, Secretary of State John Kerry said on Sunday that Russia had funneled large quantities of heavy weapons to Ukrainian separatists and trained them how to operate SA-11 antiaircraft missiles, the type of system that is believed to have been used to shoot down the Malaysian airliner over eastern Ukraine.

“We know for certain that the separatists have a proficiency that they’ve gained by training from Russians as to how to use these sophisticated SA-11 systems,” Mr. Kerry said on the CNN program “State of the Union.”

Just as when CIA Director John Brennan got his panties in a wad over al Qaeda training death squads in Syria after we had trained our own death squads to send there, Kerry is now saying that Russia choosing a group to arm and train is a horrible thing even though he has been instrumental in helping the Obama administration to do the exact same thing in other areas.

And just as the US now faces problems in its upcoming training of Iraqi troops because of the previous failures in training Iraqi troops, there is reason to believe that the atrocity of MH17 may be due in part to failed training by the Russians. From today’s Washington Post:

Meanwhile, in Kiev, the U.S. Embassy said American intelligence analysts had confirmed the authenticity of recorded conversations in which rebel leaders bragged about shooting down what they thought was a Ukrainian military transport plane moments after the Malaysian jetliner was blown apart.

So even though the separatists are good at using the missiles to blow aircraft out of the sky (the Times article notes they have downed “almost a dozen Ukrainian transport planes, reconnaissance aircraft and helicopters”), it would appear that they haven’t quite worked out that whole target verification thing and that this tragedy may not have been an intentional targeting of civilians as much as it is a training failure. But yes, the Russians own a large portion of this tragedy, as the evidence seems strong that they provided the weapon along with instructions on firing it (if not the full lesson on target verification). And their tactics in doing do were taken directly from the US playbook, all the way down to the training being an abject failure.