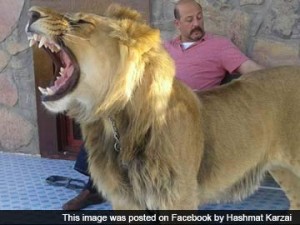 Hashmat chilling with his lion.

The cousin of the Afghan President, Hashmat Karzai was a colorful character. He kept a pet lion at his home. NDTV tells us that the photo of him and the lion at left was posted by him on Facebook. The Washington Post gives us more of his background:

For years, he ran Asia Security Group, a security company supplying logistics and protection for convoys of U.S. and other foreign troops. After his father was murdered in the early 1980s by a relative, Hashmat Karzai’s family moved to the United States, and he became a U.S. citizen and worked at a Toyota dealership in Virginia, the New York Times reported.

Regarding Asia Security Group and private security contractors in Afghanistan, recall that back in 2010, Hamid Karzai tried to expel US private security contractors so that companies (specifically including Asia Security Group) controlled by Ahmed Wali Karzai (and Hashmat, although I don’t see him mentioned in that post) could take over the business.

So Hashmat went from hiding out in the US after his father was killed to running a large security contracting company in Afghanistan, presumably raking in huge profits from the US war in Afghanistan. That history, along with his being a cousin of the president, would of course make him a logical target for any number of reasons. But Hashmat’s recent activities suggest another strong possibility for why he was killed. From The Guardian:

Hashmat Karzai was a campaign manager in Kandahar for Ashraf Ghani, one of the two presidential candidates involved in a bitter dispute over fraud that threatens to pitch the country into worsening instability.

The Post story adds that the bomber was only 16:

The bomber, a 16-year-old boy, detonated explosives hidden in his turban while embracing Hashmat Karzai as part of special greetings for the Eid al-Fitr Muslim holiday at Karzai’s home in Karz district of Kandahar, they said.

The bomber also was well dressed, according to Reuters:

A spokesman for the provincial governor said the bomber had been well dressed.

“His style was very modern, everything was new, and when he came to talk with Hashmat Khalil and wish him a happy Eid, he blew himself up,” the spokesman said.

Reuters adds that no group has claimed responsibility for the attack yet. There were no other fatalities in the explosion.

“We will not succumb to cowardly acts of the enemies of Afghanistan,” he wrote. “Every loss of Afghans reminds us that we must stay united to overcome the challenges.”

It will be very interesting to see if more information comes to light on the motives of the suicide bomber and whether Ghani’s followers take it upon themselves to seek revenge in any way. Many have predicted that the Abdullah-Ghani disputed recount could spark a civil war along ethnic lines. Should that come to pass, the killing of Hashmat Karzai may stand out as the first casualty of that war.