Why Was CIA Assessing Whether They Could Drone-Kill Anwar al-Awlaki?

For years, defenders of the drone killing of Anwar al-Awlaki have always pointed to the second confession Umar Farouk Abdulmutallab made, implicating Awlaki in each and every part of his plot.

There were always problems with that. Several pieces of evidence indicate the drone attack on December 24, 2009 that missed Awalaki had specifically targeted him; at that point, the government did not consider Awlaki operational. Abdulmutallab made 3 confessions, and only the one made to the High Value Interrogation Group (HIG) after a month of isolation and in the context of a (I’ve heard second-hand, unbelievably generous) plea deal that was never finalized implicated Awlaki in planning his attack. Claims Awlaki helped Abdulmutallab make his martyrdom video don’t explain why AQAP’s best English language propagandist would make a video with a man schooled in English in Arabic. Subsequent evidence suggests actions attributed to Awlaki in that confession were probably taken by Fahd al-Quso and Nasir al-Wuhayshi.

In other words, there are a lot of holes in the confession always used to justify Awlaki’s drone killing. Abdulmutallab’s second confession should be treated the same as his first and third ones: a narrative crafted by someone who has a big incentive to shade the truth, and therefore of dubious reliability. 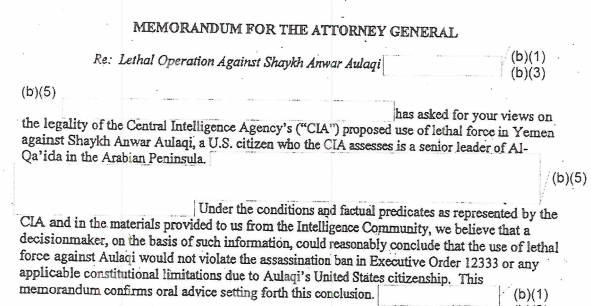 The memo relies not on what FBI has told OLC. It relies on CIA’s assessment that Awlaki is “a senior leader of al-Qa’ida in the Arabian Peninsula” based on “factual predicates as represented by the CIA and in the materials provided to use from the Intelligence Community.”Abdulmutallab’s second confession might be included in those materials provided from the IC. Even though the confession was obtained as part of a criminal investigation, the FBI is part of the IC, so broadly speaking that second confession would qualify, I guess.

But the assessment came not from FBI, which had the lead investigating the Undiebomb attack, but from the CIA. Which ought to give you pause, given that just months before this memo was written, the intelligence community’s partners had convinced the US that they hadn’t killed a Bedouin clan in the al-Majala strike. Indeed, the intelligence relating to Awlaki seemed to be consistently stinky until such time as the CIA set up its own drone base in Saudi Arabia in mid-2011.

Besides, what are we executing American citizens based on the CIA’s assessment for anyway?

At least according to David Barron, the case against Awlaki came not from FBI, but from CIA. That doesn’t mean CIA didn’t have evidence supporting its claims (and remember, CIA has a role in HIG, as does JSOC). But it does suggest Abdulmutallab’s second confession may not have the role the defenders of Awlaki’s execution like to cling to.