Did Afghan and Pakistani ISIS Recruits Really Expect to Travel Length of Iran? 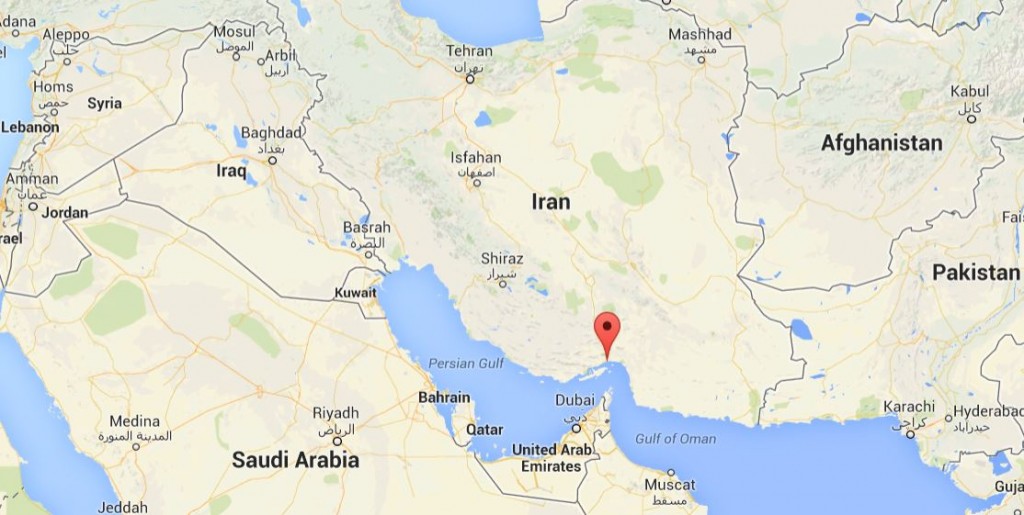 The red marker for Bandar Abbas falls close to a projected flight path, and more than halfway from Bagram (Kabul) to Dubai. Note that travelers entering Iran along the Pakistan border would need to traverse entire country to reach Iraq.

Disclaimer: There is a very good chance that my thinking here is so off-target as to make it total bullshit, but it is still a fun exercise in trying to make sense of recent events. –JW

Long-time readers will be familiar with my strange hobby of noting interesting events taking place along the border between Pakistan and Iran. We have a new entry in that category, and this time the information we have is quite cryptic. The initial report came from IRNA, dated September 8:

Minister of the Interior Abdolreza Rahmani Fazli said here on Monday Afghan and Pakistan nationals, who were trying to cross Iranian borderlines to join the Islamic State of Iraq and the Levant (also known as Daesh) terrorists in Iraq, have been arrested.

Speaking in a local gathering, Rahmani Fazli underscored that the Iranian military forces and residents of the border areas are fully vigilant against Daesh plots to counter potential threats.

He added that Iranian forces are on full alert, as the Daesh terrorist group is failing in Iraq.

Note that Fazli does not state where or when these arrests took place. Mehr News expanded slightly on the IRNA story:

Iran’s Interior Minister Abdolreza Rahmani Fazli in a meeting of the country’s deputy governors for political, social and security affairs said that a number of Afghans and Pakistanis who were passing through Iran seeking to join ISIL in Iraq were arrested.

Rahmani Fazli added that the country had already prevented some other Afghans and Pakistanis to enter Iran.

“ISIL terrorists have not succeeded in recruitment of fans inside the country; however, this is not to deny they promote their ideology, since they are active in the cyberspace, connecting to the possible candidates for recruitment,” the minister said.

He asserted that there is no fear of any danger of this terrorist group for the country because the residents of Iranian border provinces are smart enough and the security forces are completely dominant over the borders.

Hmm. Last October those security forces weren’t exactly “completely dominant” when fourteen Iranian border guards were killed. But mostly, it does seem to me that Sunni fighters wishing to make their way to the front lines to aid ISIS in Iraq or Syria would be ill-advised to try to make their way across the longest part of Shia-controlled Iran from Pakistan.

News outlets in both Pakistan and Afghanistan have noted Iran’s announcement of the arrests but add no new information on how many militants were arrested or the loacation or date of the arrests.

This event stood out to me because I had been intrigued by Friday’s strange episode where a plane transporting coalition military contractors from Kabul to Dubai made an unscheduled landing in Iran:

A charter airplane carrying American military contractors through Iranian airspace was instructed to land in Iran on Friday, but the United States attributed the episode to an easily corrected bureaucratic issue and not a larger political incident between two countries with a long history of hostility.

The airplane, chartered by the international military coalition in Afghanistan, was flying from Bagram Air Base north of Kabul to Dubai in the United Arab Emirates when it ran into trouble with Iranian air traffic controllers over its flight plan.

The plane was rerouted to the coastal Iranian city of Bandar Abbas, where it landed pending a resolution of the issue. It was later allowed to depart Iran, and by Friday night, the plane had landed in Dubai, officials said.“This is nothing to get alarmed over,” said an Obama administration official, who like other American officials insisted on anonymity to discuss a potentially delicate diplomatic situation. “This is a bureaucratic problem with the flight plan, and it’s going to be resolved shortly. This is not a political statement.”

The official story on the flight plan is that the plane was delayed several hours on its takeoff from Bagram and Iranian flight controllers considered the flight plan to have expired. They instructed the plane to return to Bagram and file a new flight plan. The crew of the plane responded that they didn’t have sufficient fuel for that return flight and so the plane was informed to land at Bandar Abbas. From the map above, it is clear that by the time the plane would have entered Iranian air space, it would have been more than halfway along the direct route from Kabul to Dubai, so it likely didn’t have sufficient fuel to return to Bagram.

It is strange that the flight would be told to land at Bandar Abbas, since it would have nearly completed its traverse of Iran by the time it got there. Although the eastern side of Iran is moderately remote, there are airports at Kerman and Zahedan that would not have been very far off the flight path and seem large enough for the flight to have landed, so the reasoning behind the choice of Bandar Abbas is obscure.

At any rate, when I first heard of the flight from Bagram landing in Iran, I immediately began to wonder whether there might be some sort of prisoner exchange taking place. After all, the US still has a number of international prisoners housed at Bagram. With the situation on the ground in Afghanistan looking increasingly shaky, the disposition of these prisoners could be one of the most difficult aspects of a hasty retreat from Afghanistan should the US decide not to leave a small force there after the end of this year.

So, is it possible that the landing in Bandar Abbas was actually staged so that some of these prisoners could be dropped off? If so, the cryptic announcement of new fighters being arrested in Iran could fit pretty closely with that event. It is a bit more difficult to account for the announcement saying that Afghans as well as Pakistanis were part of the arrests. The official story is that the US no longer holds any Afghan prisoners at Bagram, but the US has long played shell games with prisoners there, so they would be motivated to make any actual Afghan prisoners disappear quietly. [And note this report by Spencer Ackerman where it seems that the foreign prisoners held by the US at Bagram seem to have at least some communications with Afghan prisoners so that hunger strikes spread between the two populations.]

Anyhow, the strongest reason to doubt the report of Iran arresting fighters who wanted to traverse Iran to reach Iraq is just how unlikely it seems that fighters would choose such a route to the battle. Although there are many press reports of the flow of Pakistani and Afghan fighters to Iraq and Syria, few of them address the routes taken. This AP story from July offers a bit of information:

The militants are traveling to Syria by various routes, and some are taking their families. The most closely watched are secretly taking speed boats from Baluchistan’s coast to the Omani capital of Muscat and then traveling onward to Syria, Hamza said.

Crossing a fairly narrow region of the Gulf or flying certainly looks like a better option for these fighters than trying to cross Iran on land.

If the US has handed off some prisoners for Iran to hold, let’s hope that the US got something, or someone, important in return.