As you likely know, there have been two developments with NSLs in the last few days. First, Twitter sued DOJ, on First Amendment grounds, to be able to publish how many NSLs and FISA orders it has received. And EFF argued before the 9th Circuit that the entire NSL statute should be declared unconstitutional.

These developments intersect with the USA Freedom Act in an interesting way. In the 9th Circuit, the Court (I believe this is Mary Murguia based on tweets from lawyers who were there, but am not certain) asked why Congress hasn’t just fixed the Constitutional problems identified in Doe v. Mukasey with NSL gag orders.

That set off DOJ Appellate lawyer Douglas Letter hemming and hawing in rather unspecific language (my transcription).

Mary Murguia: Have any measures been taken to Congress to try to change that reciprocal notice procedure, to make it legal as the 2nd Circuit suggested?

Douglas Letter: Your honor, my understanding is, and I’m a little hesitant to talk about this in this sense, as we know proposals can be made to Congress and who knows what will happen? The government is working on some, a, is working with Congressional staffers etcetera, we would hope that at some point we would have legislation. We do not as this point. I’m not, I’m not going to here make any predictions whether anything passes.

What Letter was talking about — bizarrely without mentioning it — was a provision addressing the unconstitutional NSL gags in USA Freedom Act.

The provision fixes one part of the NSLs by putting the onus on FBI to review every year whether gags must remain in place.

(A) IN GENERAL.—In the case of any request under subsection (b) for which a recipient has submitted a notification to the Government under section 3511(b)(1)(A) or filed a petition for judicial review under subsection (d)—

This would fix the problem identified by the 2nd Circuit.

Except that, bizarrely, it would require FBI to do what Letter represented to the Court FBI could not do — review the gags every year. Presumably, they assume so few providers will challenge the gag that they’ll be able to manage those few yearly reviews that would be required.

(B) CLOSURE OF INVESTIGATION.—Upon closure of the investigation—

(i) the Federal Bureau of Investigation may petition the court before which a notification or petition for judicial review under subsection (d) has been filed for a determination that disclosure may result in the harm described in clause (i), (ii), (iii), or (iv) of paragraph (1)(B), if it notifies the recipient of such petition;

(ii) the court shall review such a petition pursuant to the procedures under section 3511; and

(iii) if the court determines that there is reason to believe that disclosure may result in the harm described in clause (i), (ii), (iii), or (iv) of paragraph (1)(B), the Federal Bureau of Investigation shall no longer be required to conduct the annual review of the facts supporting the nondisclosure requirement under subparagraph (A).

That is, in addition to fixing the constitutional problem with NSLs, USAF provides FBI way out of the supposedly onerous problem that fix requires, by establishing a way to get a permanent gag.

The NSL provisions in USAF have not gone totally unnoticed. Perhaps appropriately, one of the few public comments on it came from the EFF. It lumps it in with FBI’s exemption from reporting back door searches.

The FBI is exempt from Section 702 reporting, and the bill appears to provide a path for the FBI to get permanent gag orders in connection with national security letters.

And bill champion Kevin Bankston is acutely aware of the dynamic as well; after Twitter announced his suit he suggested this was a good reason to pass USAF. 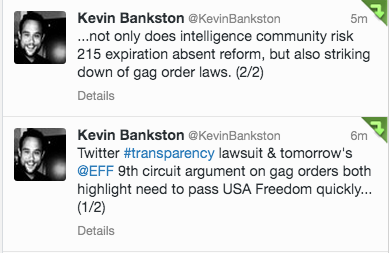 Me, I’d rather let the courts work and get the leverage we might get that way.

Especially since it seems like FBI is more able to review yearly gag renewals that Letter told the court.