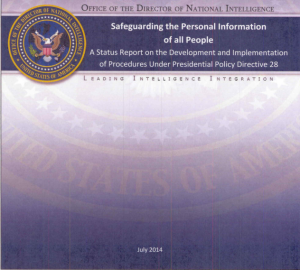 Sometimes I Con the Record outdoes itself.

“Merely to assert – without particularization – that mass surveillance technology can contribute to the suppression and prosecution of acts of terrorism does not provide an adequate human rights law justification for its use. The fact that something is technically feasible, and that it may sometimes yield useful intelligence, does not by itself mean that it is either reasonable or lawful.”

“It is incompatible with existing concepts of privacy for states to collect all communications or metadata all the time indiscriminately. The very essence of the right to the privacy of communication is that infringements must be exceptional, and justified on a case-by-case basis.”

Today, I Con the Record released a “Status Report” on an initiative President Obama ordered in his PPD-28 back in January to extend privacy protections to foreigners.

As we work to meet the January 2015 deadline, PPD-28 called on the Director of National Intelligence to prepare an interim report on the status of our efforts and to evaluate, in coordination with the Department of Justice and the rest of the Intelligence Community, additional retention and dissemination safeguards.

The DNI’s interim report is now being made available to the public in line with our pledge to share as much information about sensitive intelligence activities as is possible, consistent with our national security.

One thing this interim report requires is that “elements shall publicly release their PPD-28 implementation policies and procedures to the maximum extent possible.” Which requirement, you might assume, this release fulfills.

Which is why it’s so curious I Con the Record chose not to release an unclassified report mandated and mandating transparency — dated July 2014 — until October 2014.

Lest I be called a cynic, let me acknowledge that there are key parts of this that may represent improvements (or may not). The report asserts:

Those are good things! Yeah us!

There are, however, a series of exceptions to these rules.

First, the guidelines in this report restate PPD-28’s unbelievably broad approval of the use of bulk data, in full. The report does include this language:

Unless I’m missing something, the only “limits” in this section are those limiting the use of bulk collection to almost all of NSA’s targets, including counterterrorism, cybersecurity, and crime, among other things. Thus, the passage not only reaffirms what amounts to a broad permission to use bulk, but then attaches those weaker handling rules to anything used in conjunction with bulk.

Then there are the other exceptions. The privacy rules in this document don’t apply to:

And, if these procedures aren’t loosey goosey enough for you, the report includes this language:

It is important that elements have the ability to deviate from their procedures when national security requires doing so, but only with approval at a senior level within the Intelligence Community element and notice to the DNI and the Attorney General.

Congratulations world! We’re going to treat you like Americans. Except in the majority of situations when we’ve decided not to grant you that treatment. Rest easy, though, knowing you’re data is sitting in a database for only 5 years, if we feel like following that rule.