Under Cover: The Targets of Stings

The NYT brought in Will Arkin (partnering with Eric Lichtblau) to talk about the proliferation of the use of undercover officials in government agencies. The Supreme Court, IRS, the Smithsonian, and DOD are all playing dress up to spy on Americans (and the IRS permits agents to pretend to be lawyers, doctors, clergy, and journalists).

The article makes it clear that — as might be imagined — the drug war is the most common focus of these undercover officers.

More than half of all the work they described is in pursuit of the illicit drug trade. Money laundering, gangs and organized crime investigations make up the second-largest group of operations.

But it doesn’t really step back and look at who else is getting targeted, which I’ve tried to lay on in this stable. 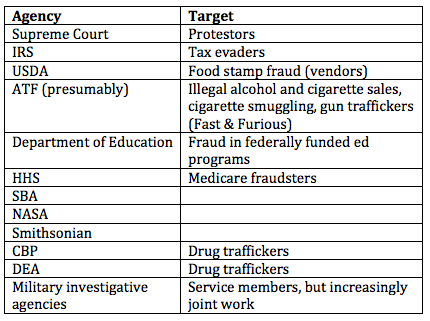 There are several concerning aspects of this list. I’m hoping the Smithsonian is using under cover officers solely to police the Holocaust and similar museums; the Holocaust museum, after all, has been targeted by a right wing terrorist recently. I might see the point on the Washington Memorial. But I do hope they’re no patrolling the Air and Space Museum because they might catch people who, like I did when I was in fifth grade, use the museum as a playground for stupid pre-teen drama while on a field trip.

DOD’s expanded use of undercover officers to target Americans is very troubling. The 9th Circuit recently threw out a conviction because the Navy had initiated the case searching data in the guise of protecting Spokane’s bases. I suspect, in response, the government will just get more assiduous at laundering such investigations. And it would be highly improper for them to do so clandestinely.

If USDA is going undercover, why not send undercover inspectors to work in food processing plants, as a great way to not only show the food safety violations, but also the labor violations? Why not go undercover to investigate CAFOs?

But when DOJ’s Inspector General investigated what FBI did when it was given $196 million between 2009 and 2011 to investigate (penny ante) mortgage fraud, FBI’s focus on the issue actually decreased (and DOJ lied about its results). When FBI decided to try to investigate mortgage fraud proactively by using undercover operations, like it does terrorism and drugs, its agents just couldn’t figure out how to do so (in many cases Agents were never told of the effort), so the effort was dropped.

So it’s not just that Agencies are using undercover officers to investigate every little thing, including legitimate dissent, with too little oversight.

Its also that the government, as a whole, is using this increasingly to investigate those penny ante crimes, but not the biggest criminals, like the banksters. So long as the choice of these undercover operations reflects inherent bias (and it always has, especially in the war on drugs), then the underlying structure is illegitimate.

Kitties Eat Cardinals and Leave the Guts as a Gift on the Doorstep!!!! US Feeding its Addiction to Training Iraqi Military
Scroll to top