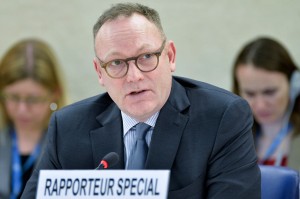 Ben Emmerson is the UN’s Special Rapporteur on counterterrorism and human rights. His statement released yesterday in response to the SSCI torture report points out the clear responsibilities that the US has under the Convention Against Torture and other international human rights laws to prosecute not only those who carried out torture, but those who designed the torture program and gave orders for its implementation.

Emmerson opens by noting the delay in release of the report’s summary:

I welcome the belated publication of the summary report by the United States Senate Select Committee on Intelligence into the crimes of torture and enforced disappearance of terrorist suspects by the Bush-era CIA. It has taken four years since the report was finalised to reach this point. The Administration is to be commended for resisting domestic pressure to suppress these important findings.

In my 2013 report* to the Human Rights Council as SpeciaI Rapporteur, I called on the US Government to release the report without further delay, and to ensure that it was published in full, without excessive and unnecessary redactions.

Emmerson then gets down to business:

The summary of the Feinstein report which was released this afternoon confirms what the international community has long believed – that there was a clear policy orchestrated at a high level within the Bush administration, which allowed to commit systematic crimes and gross violations of international human rights law.

The identities of the perpetrators, and many other details, have been redacted in the published summary report but are known to the Select Committee and to those who provided the Committee with information on the programme.

So we know that crimes have been committed. Further, the committee also knows who is responsible for those crimes. What to do about it?

It is now time to take action. The individuals responsible for the criminal conspiracy revealed in today’s report must be brought to justice, and must face criminal penalties commensurate with the gravity of their crimes.

The fact that the policies revealed in this report were authorised at a high level within the US Government provides no excuse whatsoever. Indeed, it reinforces the need for criminal accountability.

Emmerson then goes on to destroy Barack Obama’s “look forward” bullshit and John Durham’s coverup disguised as an investigation:

International law prohibits the granting of immunities to public officials who have engaged in acts of torture. This applies not only to the actual perpetrators but also to those senior officials within the US Government who devised, planned and authorised these crimes.

As a matter of international law, the US is legally obliged to bring those responsible to justice. The UN Convention Against Torture and the UN Convention on Enforced Disappearances require States to prosecute acts of torture and enforced disappearance where there is sufficient evidence to provide a reasonable prospect of conviction. States are not free to maintain or permit impunity for these grave crimes.

Obama, Holder and Durham simply cannot grant immunity for these crimes. International law forbids it. More specifically, the Convention Against Torture, to which the US is a signatory, prohibits it. Similarly, the Convention on Enforced Disappearances also comes into play in the crimes committed by the US and also prevents the granting of immunity that Obama has tried to orchestrate.

Emmerson’s conclusion reiterates those points and provides a warning to those guilty of these crimes:

It is no defence for a public official to claim that they were acting on superior orders. CIA officers who physically committed acts of torture therefore bear individual criminal responsibility for their conduct, and cannot hide behind the authorisation they were given by their superiors.

However, the heaviest penalties should be reserved for those most seriously implicated in the planning and purported authorisation of these crimes. Former Bush Administration officials who have admitted their involvement in the programme should also face criminal prosecution for their acts.

President Obama made it clear more than five years ago that the US Government recognises the use of waterboarding as torture. There is therefore no excuse for shielding the perpetrators from justice any longer. The US Attorney General is under a legal duty to bring criminal charges against those responsible.

Torture is a crime of universal jurisdiction. The perpetrators may be prosecuted by any other country they may travel to. However, the primary responsibility for bringing them to justice rests with the US Department of Justice and the Attorney General.

Emmerson specifically calls out those who planned and authorized the torture as deserving the “heaviest penalties”.

And they need to be careful. Even though they are facing no punishment in the US for their crimes, these criminals can face prosecution should they travel abroad because torture is a crime subject to universal jurisdiction. Under universal jurisdiction, other countries would normally defer to the US for prosecution of crimes carried out by citizens of the US. However, once it is clear that no such prosecutions will take place, other countries are free to act.

Although I’d like to see them inside cells of much smaller dimensions, it appears that for now those who designed the CIA torture program and ordered its implementation are now imprisoned within the borders of the US because they are at risk of real prosecution while traveling outside the borders.