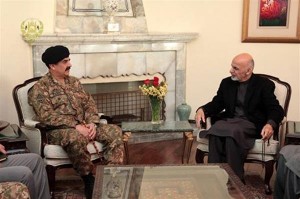 Pakistan’s military action against terrorists launched in June, Zarb-e-Azb, is being expanded, with attacks now taking place outside the tribal areas. But it is not just Pakistan’s military that is expanding its activity outside the tribal area. A drone strike today took place right on the Afghan border with Pakistan, just outside Khyber Pakhtunkhwa province. US drone strikes in Pakistan have been almost exclusively in the tribal region, so an attack right on the border of another province is rare. Dawn reports that the attack targeted those believed to be responsible for the Peshawar attack:

Intelligence sources said the drone targeted a militant compound in Cort Village of Nazyan, completely destroying the compound. Aside from the eight dead, scores of others were reportedly injured on the zero line, which has been serving as a safe haven for the Mullah Fazllullah led Tehreek-i-Taliban Pakistan (TTP).

According to security officials, militants based in the Nazyan district had planned the devastating attack on the Army Public School in Peshawar, which left over 140 children and teachers dead and scores injured.

Gosh, I wonder who might have been the target of that attack? Check this out:

Prime Minister Nawaz Sharif, while chairing a meeting on the country’s internal security at General Headquarters (GHQ), was informed about the army and Isaf’s decision to target Tehreek-e-Taliban Pakistan chief Maulvi Fazlullah, sources told The Express Tribune on Friday.

Fazlullah was reportedly in contact with the Peshawar school attackers from Afghanistan during the assault which left 141 people, mostly school children, dead on December 16.

“Although Chief of Army Staff General Raheel Sharif and DG ISI Rizwan Akhter have provided audio proof of attackers talking to Fazlullah during the assault, Army is currently refraining from chasing targets across the international border,” the sources said. The audio recording, handed to Afghan authorities, was in Pashto.
Further, sources said, the military leadership and Isaf agreed to target Fazlullah in a drone attack rather than a ground operation in the Nanger Har, Nooristan and Kunar areas of Afghanistan, where Fazlullah is believed to be taking sanctuary.

Aside from the military response, however, it appears that police work is having some success in tracking the attack:

At least four suspects, including a woman, were arrested from southern Punjab’s Hasilpur area in connection with Tuesday’s carnage in Peshawar that claimed the lives of more than 140 people, DawnNews reported.

The four were tracked through a mobile SIM which was reportedly used by terrorists during the attack on the military-run Army Public School. The SIM was registered in the name of the woman who was taken into custody along with three others from Gharibabad area of Hasilpur, a city in the district of Bahawalpur.

Dawn’s report on the Peshawar attack had quoted a senior military official as saying that militants had been in direct communication with their handler in Afghanistan, Umar Naray, alias Umar Khalifa Adinzai – a well-known commander of the TTP’s Tariq Geedar group. “He was directing the suicide bombers and the attack group,” the official had said.

Gosh, those militants spent a lot of time on the phone during their attack if they spoke with both Naray and Fazlullah. Note also that these arrests were a long way from Peshawar and the Afghan border area where the drone strike took place.