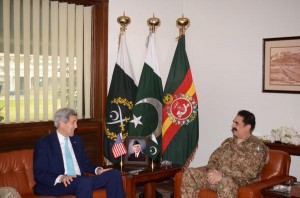 John Kerry visited Pakistan yesterday to provide the delayed announcement of $250 million from the US to aid displaced Pakistanis and rebuild infrastructure in the wake of the Zarb-e-Azb offensive against terrorists in Pakistan’s tribal areas. We get some detail from the New York Times for how the aid is to be used:

The $250 million in American assistance is to be used to provide food, shelter, medical support, and to restore basic services in Waziristan and the other Federally Administered Tribal Areas, so that the more than 700,000 people who have fled the fighting can return, American officials said. The aid would be redirected from assistance that had already been appropriated for Pakistan.

Of course, even with this repurposing of funds, the US is using it as enticement for what it really wants from Pakistan:

A senior State Department official said before the meetings here that Mr. Kerry would emphasize that Pakistan’s crackdown against militants should be extended to the Haqqani network, which has organized attacks in Afghanistan against American and local forces; to Afghan Taliban fighters who have sought refuge in Pakistan; and to Lashkar-e-Taiba, a Pakistani group that is widely believed to be responsible for the 2008 terrorist attack in Mumbai, India.

“Part of the secretary’s core message will be to ensure that actions are met with a real and sustained effort to constrain the ability of the Haqqani network, Lashkar-e-Taiba, the Afghan Taliban, and other militants who pose a threat to regional stability and to direct U.S. interests,” said the official, who spoke on the condition of anonymity in accordance with the agency’s procedure for briefing reporters.

To show its gratitude to the US, Pakistan celebrated by hanging seven prisoners during Kerry’s visit.

This level of support from the US for Pakistan’s displaced population puts US support for refugees from Syria’s civil war to shame. While the US pats itself loudly on the back by combining refugee support figures for 2012-2015 to claim a $3 billion commitment, when we look at what has been announced for 2015 (pdf, scroll to page 6), I see only $277 million. Although that is more money for Syrian refugees, there are almost ten times more refugees in the Syrian conflict than in Pakistan. The story above cites 700,000 displaced by current offensive and the Internal Displacement Monitoring Centre puts the overall figure for Pakistan at around 1.15 million. By comparison, the same group notes 7.6 million internally displaced Syrians and 2.8 million refugees from Syria in surrounding nations. The total is very nearly half of Syria’s 21.9 million total population.

If the US provided the same per capita support to Syrian refugees in 2015 as it has pledged for Pakistan, the $250 million for 1.1 million Pakistani refugees would become approximately $2.4 billion. Given the dire conditions in Syrian refugee camps this winter, such a commitment would be vital, but don’t look for it anytime soon.