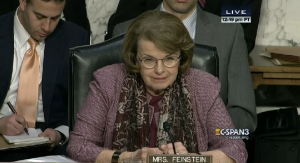 Today’s SSCI public hearing was remarkably useful, in spite of Chairman Burr’s interrupting a chain of serious questions to ask a clown question of National Counterterrorism Center head Nick Rasmussen. Roy Blunt, Marco Rubio, and Angus King all asked questions about Authorizations to Use Military Force that will be useful in the upcoming debate.

The highlight, however, came when Dianne Feinstein asked Rasmussen whether the claims of great harm — provided to her just before she released the Torture Report in December — had proven to be correct.

Feinstein: And I have one other question to ask the Director. Um, Mr. Director, days before the public release of our report on CIA detention and interrogation, we received an intelligence assessment predicting violence throughout the world and significant damage to United States relationships. NCTC participated in that assessment. Do you believe that assessment proved correct?

Rasmussen: I can speak particularly to the threat portion of that rather than the partnership aspect of that because I would say that’s the part NCTC would have the most direct purchase on, and I can’t say that I can disaggregate the level of terrorism and violence we’ve seen in the period since the report was issued, disaggregate that level from what we might have seen otherwise because, as you know, the turmoil roiling in those parts of the world, not that part of the world, those parts of the world, the Middle East, Africa, South Asia, there’s a number of factors that go on creating the difficult threat environment we face.

So the assessment we made at the time as a community was that we would increase or add to the threat picture in those places. I don’t know that looking backwards now, I can say it did by X% or it didn’t by X%. We were also, I think, clear in saying that there’s parts of the impact that we will not know until we have the benefit of time to see how it would play out in different locations around the world.

Feinstein: Oh boy do I disagree with you. But that’s what makes this arena I guess. The fact in my mind was that the threat assessment was not correct.

Note, Ron Wyden used his one question to get Rasumussen to admit that he had only read the Torture Report summary in enough detail to conduct the threat assessment. Wyden informed Rasmussen there were other parts in the still-classified sections that he should be aware of as NCTC head.