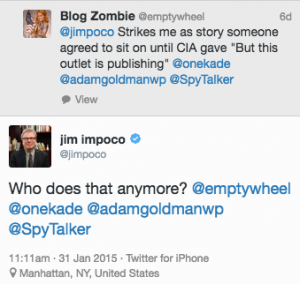 Ten days ago, I noted that — after he denied it to me — Newsweek’s editor, Jim Impoco, admitted that his magazine had sat on a story about CIA’s role in killing Imad Mugniyeh in 2008.

Almost exactly a week ago, theWashington Post reported on CIA’s role in the 2008 car bomb killing of the key Hezbollah planner behind the terrorist attack on the American Embassy in Lebanon in 1983, Imad Mugniyeh.

As everyone was discussing the story the next day, I suggested the timing made it seem as if one outlet — I was agnostic about which one — had sat on the story at the request of CIA. Newsweek’s editor, Jim Impoco, scoffed that anyone might do such a thing.

“Who does that anymore?” he asked.

Politico just confirmed that I was correct: Newsweek sat on the story for a year in response to a CIA request.

CBS’s has a column purporting to rebut the claims laid out in Newsweek and WaPo’s versions.

According to the published accounts, the bomb had been designed, shaped, and repeatedly tested at an American base to be sure that only Mughniyeh and no other people would be killed.

Because of the revelation that the CIA was part of the mission, as well as details of how it was accomplished, Israelis close to their country’s security services wondered why American sources chose to leak so much about it.

One result was that some of those Israelis – apparently miffed that the Americans were taking too much credit – went to the trouble of speaking with Western officials and diplomats to offer corrections.

Contrary to the recent reports, the Israelis claim to have designed and tested the bomb, while respecting the CIA’s insistence that it not be too large so as not to kill any innocents.

According to this version, then-Prime Minister Ehud Olmert kept track of the testing and – during a trip to Washington – even showed some of the videos to George W. Bush, who was impressed and enthusiastic about eliminating Mughniyeh. The CIA had briefly withdrawn from the mission, but President Bush brought the agency back in. [my emphasis]

Given the confirmation that Newsweek sat on their story for a year at CIA’s request, this story makes no sense. CIA would have had an easier way to quash the story if they weren’t involved at all. They chose not to avail of that.

Maybe CIA’s still trying to bury this story, only with the help of Mossad now?