Jeb! Manspreads His Way into the Foreign Policy Debate 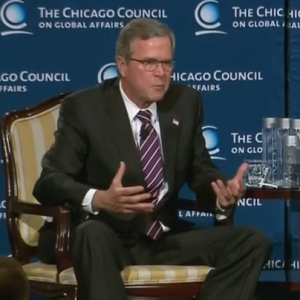 Vote Jeb! 2016: Because every American man deserves a seat for each of his balls.

Perhaps I’m being petty, getting so bugged by Jeb’s utter lack of awareness not just by his body language, but the message that that most annoying male body language sends to those who’ve had to spend their life squishing into a half seat to make room for some man who believes his balls take precedence over the other human beings in his space.

(Also note, at around 49:00, precisely when Jeb! starts talking about his brother’s WMD lies but then claims the surge the most courageous political act ever, he crosses his legs.)

I mean, much of the speech was word salad. The last few minutes of his speech could have been delivered as convincingly by Sarah Palin — just a string of words about American leadership without any substance to what that really means.

Then there was the contradiction within his message. He’s branding his whole spiel “Liberty Diplomacy!” Yet the guy who claimed a “liberty” agenda objects to Obama’s effort to end what he called the “NSA metadata program,” either displaying ignorance that the Section 215 program that Obama wants to alter is just a small fraction of the metadata NSA collects, or even greater ignorance that Obama has done and will do nothing to end all the other means of collecting metadata, including on Americans. Not to mention real ignorance about the NSA’s own evidence about how useless the 215 phone dragnet has been.

That’s was consistent with his theory that if we significantly increase funding for our national security budget, we’ll never have need to go to war. “Others should want America as a friend,” Jeb! said, presumably at the tip of vastly increased defense spending.

Jeb! clearly believes he projects strength in Latin American foreign policy. The brother of the man whose DOJ chose not to charge any of the big white GOP donors at Chiquita who knowingly funded right wing terrorists in Colombia hailed Uribe’s great success there. Which, presumably, reflects his larger conflation of capitalism and democracy, which permits him to ignore the way Bolivarist countries have improved their countries’ well-being. He positively drooled over Venezuela becoming a failed state with low gas prices (though many Democrats are too). Then again, the Bush family has a well-established fondness for terrorists in Venezuela, so he’ll probably be thrilled if more arise in such a failed state.

Well, about one thing Bush was right on the mark. He noted that neither ISIL nor Twitter existed when his brother invaded Iraq. That is, ISIL didn’t exist until his brother fucked up the joint.

All in all, though, I can only conclude that by Liberty Diplomacy he means he will open new space for American mens’ balls to colonize, around the world.