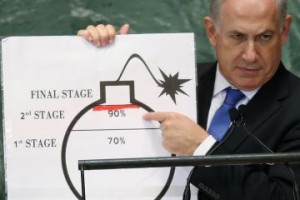 Look carefully. Are his lips moving?

Benjamin Netanyahu overstated Iran’s nuclear technology in 2012 when he used his bomb cartoon in an address to the United Nations. The Guardian and Al Jazeera have released a trove of documents relating to Iran’s nuclear program and one of the key documents was prepared by Mossad to brief South Africa just a few short weeks after the famous speech. From The Guardian:

Binyamin Netanyahu’s dramatic declaration to world leaders in 2012 that Iran was about a year away from making a nuclear bomb was contradicted by his own secret service, according to a top-secret Mossad document.

Brandishing a cartoon of a bomb with a red line to illustrate his point, the Israeli prime minister warned the UN in New York that Iran would be able to build nuclear weapons the following year and called for action to halt the process.

But in a secret report shared with South Africa a few weeks later, Israel’s intelligence agency concluded that Iran was “not performing the activity necessary to produce weapons”. The report highlights the gulf between the public claims and rhetoric of top Israeli politicians and the assessments of Israel’s military and intelligence establishment.

As The Guardian notes, although Bibi’s darling little cartoon makes little to no distinction between the steps of enriching uranium to 20% and enriching it to the 90%+ needed for a bomb, the Mossad document (pdf) states that Iran “is not ready” to enrich to the higher levels needed for a bomb:

Despite that clear information that Mossad surely already had at the time of the UN speech (h/t Andrew Fishman for the link), Netanyahu chose to portray Iran as ready to zip through the final stage of enrichment:

Now they’re well into the second stage. And by next spring, at most by next summer, at current enrichment rates, they will have finished the medium enrichment and move on to the final stage. From there, it’s only a few months, possibly a few weeks, before they get enough enriched uranium for the first bomb.

So Netanyahu described a step that the Mossad described Iran as not even ready to start and turned it into something Iran was eager to accomplish in a few weeks. Simply put, that is a lie.

Of further note in the document is information relating to the heavy water reactor under construction at Arak. Although it doesn’t appear that Netanyahu mentioned it in the UN speech, it often is portrayed as another rapid route to a nuclear weapon for Iran, because, when finally functioning, it could produce plutonium that could be used in a bomb. Mossad found, however, that Iran was still a couple of years away from having the reactor functioning. Further, Mossad realized that Iran needs a fuel reprocessing facility (that it does not have) in order to use the plutonium in a bomb:

It should also be noted that those two years have elapsed and the reactor still has not been powered up. Further, there are proposals that the reactor can be modified to make it produce a dramatically lower amount of plutonium.

These documents have been released with very important timing. As I noted last week, Netanyahu aims to destroy the P5+1 negotiations with Iran. By pointing out his lies two years ago, we should be in a better position to see through whatever obfuscation he delivers next week. But with a new air of bipartisany-ness, to his visit, don’t look for Washington politicians to be the ones to point out his next round of lies.

Postscript: I am significantly behind on my homework. I owe Marcy a careful reading of the technical documents from the Sterling trial and need to follow up more fully on the suggestions that false documents (including the Laptop of Death?) were planted with Iran for the IAEA to discover. Now with this new trove of documents and the looming date of Netanyahu’s visit, I need to get busy (on something other than planting blueberries)!