The Government Continues to Play Hide and Seek with Surveillance Authorities

Last year, I described the effort by the Reaz Qadir Khan’s lawyers to make the government list all the surveillance it had used to catch him (which, significantly, would either be targeted off a dead man or go back to the period during with the government used Stellar Wind). In October the government wrote a letter dodging most notice. Earlier this year, Judge Michael Mosman (who happens to also be a FISA judge) deferred the notice issues until late in the CIPA process. Earlier this month, Khan plead guilty to accessory to material support for terrorism after the fact.

Another defendant accused of material support, Jamshid Muhtorov, replicated that tactic, demanding notice of all the types of surveillance used against him (his co-defendant, Bakhtiyor Jumaev, joined the motion). The government responded to that motion yesterday.

A comparison of the two responses is instructive.

Part of what the government does in both is to rehearse the notice requirements of a particular statute, stating that in this case the evidence hasn’t met those terms. It does so, we can be certain, whether or not the surveillance has been used. That’s because the government addressed FISA Section 703 notice in the Khan case, and we know the government doesn’t use 703 by itself at all. 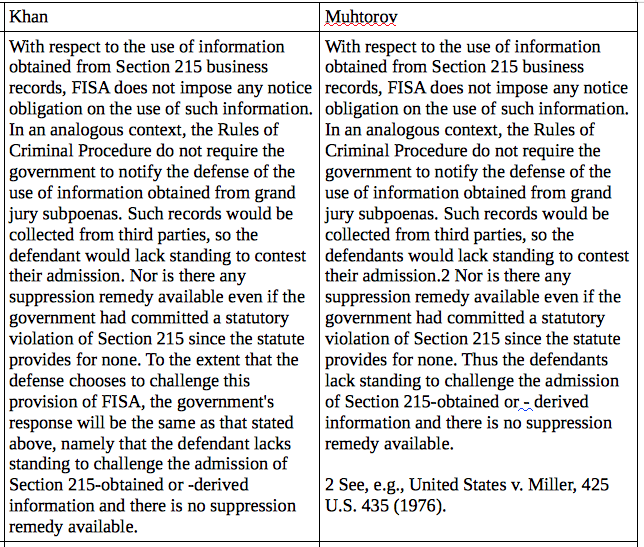 And PRTT, in which the government listed 5 criteria, all of which must be met to require notice, were virtually identical. 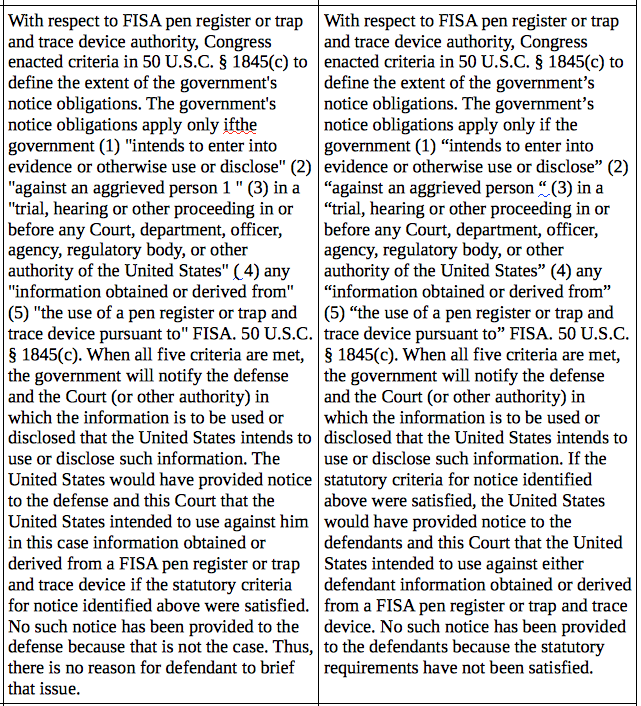 Which is why I’m interested that the government’s treatment of EO 12333 notice was different (in both cases, there’s good reason to believe EO 12333 surveillance was involved, though in the case of Khan, that would likely include the illegal dragnet).

With Khan, the government remained completely silent about the questions of EO 12333 collection.

Whereas with Muhtorov — who was likely included in the Internet metadata dragnet, but probably not in Stellar Wind — the government argues he would only get notice if Muhtorov could claim evidence used against him in a proceeding was obtained via allegedly illegal electronic surveillance.

Therefore, under circumstances where § 3504 applies, the government would be required to affirm or deny the occurrence of the surveillance only when a defendant makes a colorable claim that evidence is inadmissible because it was “the primary product of” or “obtained by the exploitation of” allegedly unlawful electronic surveillance as to which he is aggrieved.

Then it included a [sealed material redacted] notice.

Which seems tantamount to admission that EO 12333 data was used to identify Muhtorov, but that in some way his prosecution was did not arise from that data as a “primary product.”

Muhtorov was IDed in a chat room alleged to have ties to the Islamic Jihad Union, which I presume though don’t know is hosted overseas. So that may have  been EO 12333 surveillance. But it may be that his communications on it were collected via 702 using the Internet dragnet as an index.

Is the government arguing that using a dragnet the FISC declared to be in violation of FISC orders only as a Dewey Decimal system for other surveillance doesn’t really count?

tweets from our circle
Ed Walker 🍞🌹💉💉@MasaccioEWMeanwhile, Repubs cheer DeSantis banning popular kids books. twitter.com/matthewstoller…4 hours ago08 February 2023
Ed Walker 🍞🌹💉💉@MasaccioEWMarsha's social media intern is busy tonight quoting Fox News other Qrazy sources. twitter.com/MarshaBlackbur…5 hours ago08 February 2023
emptywheel@emptywheelRT @DavidDark: "Polarization and trust in the media lie at the center of Gerth’s project. Yet he failed to consider how the dossier, not th…8 hours ago07 February 2023
bmaz ( @[email protected] )@bmazI don't ever promote much of anything, but this chocolate is seriously good. kuhl.com/kuhl/other/acc…1 day ago07 February 2023
bmaz ( @[email protected] )@bmazNobody wants to coach the Cardinals. twitter.com/Vikings/status…1 day ago06 February 2023
bmaz ( @[email protected] )@bmazWhy did you need a gun in Mexico, jackass? Am there quite frequently, and never needed a gun. NASCAR Star Kyle Bu… twitter.com/i/web/status/1…1 day ago06 February 2023
Jim White@JimWhiteGNVRT @bmaz: @JimWhiteGNV @ptoemmes @laRosalind This is important. The last time I heard about a Komodo, it bit Sharon Stone's husband. http…4 days ago03 February 2023
American Hegemony: Delivering “Unpredictable Instability” the World... Will Verizon Challenge the Government’s Fishy Dragnet?
Scroll to top