Partnering with the Kiwis, NSA “Protects” Us from Climate Resistors?

The Intercept has what will be the first in a series of partnering articles with New Zealand’s great surveillance reporter Nicky Hager on the role of New Zealand’s SIGINT agency, Government Security Communications Bureau, in the Five Eyes dragnet. As part of it, they target south Pacific islands that its hard to understand as a threat to anyone.

Since 2009, the Government Communications Security Bureau intelligence base at Waihopai has moved to “full-take collection”, indiscriminately intercepting Asia-Pacific communications and providing them en masse to the NSA through the controversial NSA intelligence system XKeyscore, which is used to monitor emails and internet browsing habits.

The documents identify nearly two dozen countries that are intensively spied on by the GCSB. On the target list are most of New Zealand’s Pacific neighbours, including small and vulnerable nations such as Tuvalu, Nauru, Kiribati and Samoa.

Other South Pacific GCSB targets are Vanuatu, the Solomon Islands, New Caledonia, Fiji, Tonga and French Polynesia. The spy agency intercepts the flows of communications between these countries and then breaks them down into individual emails, phone calls, social media messages and other types of communications. All this intelligence is immediately made available to the NSA, which is based in Maryland, near Washington, DC.

Effectively, the NSA forces GCSB to spy on these teeny tiny countries in the middle of the Pacific in order to benefit from our dragnet.

Even the CIA acknowledges that Nauru has no military, and it somewhat optimistically claims Nauru has no international disputes. 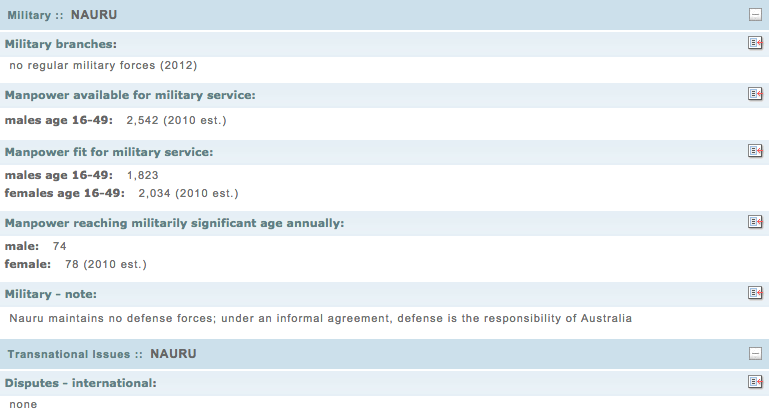 The same is true of Tuvalu.

Both have a dispute, of course. The rich lifestyles of the rest of the world (which Tuvalu shared in for a period of Phosphate exploitation) threaten to wipe these nations off the face of the earth with rising ocean levels. To the extent they might be threats to the US, it is because the citizens of Tuvalu and Nauru speak with the moral authority of some of the first peoples who will be wiped off the face of the earth because of climate change.

Aside from that, Tuvalu has its own Internet domain; Nauru has become a tax haven.

But nevertheless, we’re forcing New Zealand to get “full take” from them, as the price of admission to our spying club.