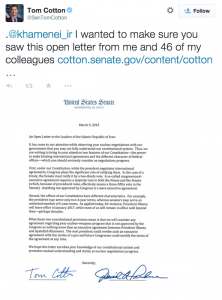 As Josh Rogin first reported, Tom Cotton and 46 other Senators have written a letter to the “leaders of the Islamic Republic of Iran.” They want to warn them that without Senate ratification, the agreement they’re working to sign with President Obama will just be an executive agreement that a future President could just revoke with the stroke of a pen.

Now, much as I’d like the Executive to be reined in in other areas, foreign affairs is the area where they’re supposed to act like an Executive. That was the whole point of moving from a confederation to a federation. So this intervention is improper in that sense, on top of serving the purported interests of Israeli right-wingers more than serving American interests.

The entire production ought to focus more attention on something I’ve been trying to get people to look at: the fundraiser held directly after Congress willingly acted like Bibi Netanyahu’s trained seal, also reported by Josh Rogin. Did Sheldon Adelson pay off all of  Bibi’s trained seals? On what scale?

Plus, Jack Goldsmith catches the Senators in an error about what the Constitution actually says (Tom Cotton as a JD from Harvard Law School, where Goldsmith teaches).

The letter states that “the Senate must ratify [a treaty] by a two-thirds vote.”  But as the Senate’s own web page makes clear: “The Senate does not ratify treaties. Instead, the Senate takes up a resolution of ratification, by which the Senate formally gives its advice and consent, empowering the president to proceed with ratification” (my emphasis).  Or, as this outstanding  2001 CRS Report on the Senate’s role in treaty-making states (at 117):  “It is the President who negotiates and ultimately ratifies treaties for the United States, but only if the Senate in the intervening period gives its advice and consent.”  Ratification is the formal act of the nation’s consent to be bound by the treaty on the international plane.  Senate consent is a necessary but not sufficient condition of treaty ratification for the United States.  As the CRS Report notes: “When a treaty to which the Senate has advised and consented … is returned to the President,” he may “simply decide not to ratify the treaty.”

This is a technical point that does not detract from the letter’s message that any administration deal with Iran might not last beyond this presidency.  (I analyzed this point here last year.)  But in a letter purporting to teach a constitutional lesson, the error is embarrassing.

Me, I’ve got another concern for these poor Senators.

Iran’s leaders are, according to the Senators’ own claims, evil terrorist-supporting murderers. Indeed, our own government considers them as such, not only imposing sanctions but — according to Dianne Feinstein and Keith Alexander — also treating Iran as one of the few “terrorist groups” association with which the NSA can use to contact chain on its dragnets of American communications.

In short, the government believes that anyone conducting communications with such people are terrorist suspects themselves, and should be dumped into a big database to have all their collected metadata analyzed for further signs of terrorism.

Tom Cotton and his 46 collaborators are now just 1-degree of separation from what they consider some badass terrorists. We’ve seen people be put on the No-Fly list for far less.

I don’t think that’s right, mind you. There’s a problem with metadata analysis.

That’s a problem the Senators might do better looking to correct, rather than working to keep the Middle East unstable for Israel’s interests.

Update: As the screen capture above makes clear, Tom Cotton has now placed himself at one degree of separation from the terrorist sponsor Ayatollah Khamenei via dead tree and Twitter.