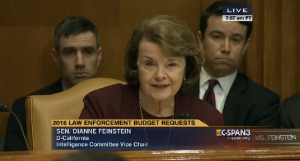 I’m surprised neither by her request nor by her plaintive manner, given how most Federal Agencies have simply blown off the Report. But I am interested in the content of the exchange (my transcription).

Feinstein: One of my disappointments was to learn that the six year report of the Senate Intelligence Committee on Detention and Interrogation Program sat in a locker and no one looked at it. And let me tell you why I’m disappointed. The report — the 6,000 pages and the 38,000 footnotes — which has been compiled contains numerous examples of a learning experience, of cases, of interrogation, of where the Department could learn — perhaps — some new things from past mistakes. And the fact that it hasn’t been opened — at least that’s what’s been reported to me — is really a great disservice. It’s classified. It’s meant for the appropriate Department. You’re certainly one of them. I’d like to ask if you open that report and designate certain people to read it and maybe even have a discussion, how things might be improved by suggestions in the report.

Comey: And I will do that Senator. As you know, I have read the [makes a finger gesture showing how thick it was] Executive Summary. You asked me to do it during my confirmation hearing, I kept that promise and read it. There’s a small number of people at the FBI — as I understand it — who have read the entire thing. But what we have not done — and I think it’s a very good question, is have we thought about whether there are lessons learned for us? There’s a tendency for me to think “we don’t engage in interrogation like that, so what’s there to learn?”

Feinstein: You did. And Bob Mueller pulled your people out, which is a great tribute to him.

Feinstein and Comey appear to have differing understandings of whether anyone at FBI has actually read the report, with Comey believing someone has read it — and professing ignorance about a “lockbox” — and Feinstein referring to a report that no one has read it, a belief that may come in part from the responses the government is making to FOIA requests. Is FBI lying about whether anyone has opened this in its FOIA responses?

But I’m also interested both that Comey hasn’t read further and that he hasn’t considered whether FBI might have anything to learn from it.

Tellingly, Comey suggests FBI would have nothing to learn because “we don’t engage in interrogation like that, so what’s there to learn.” But as Feinstein corrects, FBI did engage in “interrogation like that,” but then Bob Mueller withdrew his interrogators. Remember that Ali Soufan was present at the Thai black site for Abu Zubaydah’s first extreme sleep deprivation and long enough to see the torturers bring out a coffin-like box. His partner, Steve Gaudin, stayed even longer. That stuff doesn’t appear in the summary (the report’s silence on this earlier phase of Abu Zubaydah’s torture is one of CIA’s legitimate complaints). Moreover, there are moments later in the torture program when one or another FBI Agent (including Soufan) were present for other detainees’ interrogation, particularly for isolation. Comey wanted to suggest FBI was never involved in torture, but Feinstein reminded him they were.

Still, Feinstein seems to believe that Mueller withdrew Agents out of some kind of squeamishness. I think the record (especially from FBI Agents in Iraq who declined to write certain things down) suggests, instead, that Mueller withdrew his Agents to ensure that the FBI would never be witness to crimes committed against detainees which might force them to investigate those crimes. Indeed, it seems that in summer 2002 — at a time when US Attorney Jim Comey was relying on Abu Zubaydah’s statements to detain Jose Padilla — DOJ found a way to bracket the treatment that had already occurred and remain mostly ignorant of that which would occur over the next several years. Feinstein should know that but seems not to; Comey almost certainly does.

Who’s in charge of HIG, then? And is it engaging in isolation?

Finally, I am specifically intrigued by Comey’s apparent lack of curiosity about the full report because of his actions in 2005.

As these posts lay out (one, two), Comey was involved in the drafting of 2 new OLC memos in May 2005 (though he may have been ignorant about the third). The lies CIA told OLC in 2004 and then told OLC again in 2005 covering the same torture were among the worst, according to Mark Udall. Comey even tried to hold up the memo long enough to do fact gathering that would allow them to tie the Combined memo more closely to the detainee whose treatment the memo was apparently supposed to retroactively reauthorize. But Alberto Gonzales’ Chief of Staff Ted Ullyot told him that would not be possible.

Pat [Philbin] explained to me (as he had to [Steven Bradbury and Ted Ullyot]) that we couldn’t make the change I thought necessary by Friday [April 29]. I told him to go back to them and reiterate that fact and the fact that I would oppose any opinion that was not significantly reshaped (which would involve fact gathering that we could not complete by Friday).

[Ullyot] mentioned at one point that OLC didn’t feel like it would accede to my request to make the opinion focused on one person because they don’t give retrospective advice. I said I understood that, but that the treatment of that person had been the subject of oral advice, which OLC would simply be confirming in writing, something they do quite often.

At the end, he said that he just wanted me to know that it appeared the second opinion would go [Friday] and that he wanted to make sure I knew that and wanted to confirm that I felt I had been heard.

Presuming that memo really was meant to codify the oral authorization DOJ had given CIA (which might pertain to Hassan Ghul or another detainee tortured in 2004), then further details of the detainee’s torture would be available in the full report. Wouldn’t Comey be interested in those details now?

But then, so would details of Janat Gul’s torture, whose torture was retroactively authorized in an OLC memo Comey himself bought off on. Maybe Comey has good reason not to want to know what else is in the report.