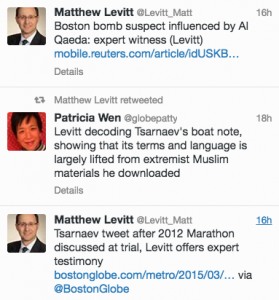 Matthew Levitt, a prominent figure in the Terror Industry, has been testifying in the Dzhokhar Tsarnaev trial. He’s one of a number of noted figures who gets presented as experts at trials who doesn’t speak Arabic, who hasn’t bothered to learn Arabic over the course of years of this work.

Yesterday, Levitt spent several hours explaining how the explanation Dzhokhar wrote on a boat in Watertown had to have come from Anwar al-Awlaki’s propaganda.

Today, on cross, it became clear the Awlaki propaganda on Dzhokhar’s computer was all Levitt got from prosectors. He didn’t know how long it had been on Dzhokhar’s computer. Nor did he know what else Dzhokhar has read. He also doesn’t know much about Chechnya, except in the context of Jihad. And though Levitt testified yesterday that there always must be a “radicalizer,” he did not know, nor was he asked, to identify the “radicalizer” in Dzhokhar’s life.

Levitt also did not, apparently, recognize some of what Dzhokhar had written as the boat as having come from the Quran.

He did, however, reveal that he gets paid $450 an hour to do this work.

When called on his RTing of his own testimony by the defense, Levitt admitted he “should have been wiser” about having done so.

I wonder, though, if Levitt was worried that the mystique of his expertise might not hold up if he didn’t constantly reinforce it with his own echo chamber?