John Ratcliffe, US Attorney until July 2008, Says He Did Back Door Searches 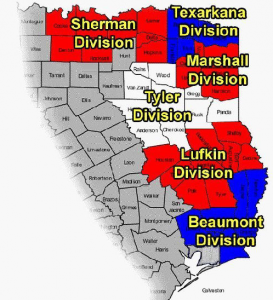 As I noted, Republican Congressman John Ratcliffe made an interesting admission during yesterday’s debate over USA F-ReDux in the House Judiciary Committee.

He said he had benefitted from back door searches — the discussion was specifically about FISA Amendments Act — when he was a prosecutor. That’s particularly interesting given the timing of his tenure Chief of Anti-Terrorism and National Security and then US Attorney for the Eastern District of Texas, which is shown to the right (and includes the suburbs of both Dallas and Houston).

If Ratcliffe did back door searches, he did them off collection other than FAA.

Now, as I have suggested, there are signs they rolled out back door searches at least as early as they rearranged Protect America Act (at first, without telling Reggie Walton, who was presiding over a challenge to the law) such that collection would come in through FBI. Even still, those January 2008 changes would be rather late in the timing of Ratcliffe’s role as a prosecutor.

John Bates made it clear such an approval — for FISA authorized production anyway — happened in 2008.

Of course, there’s the other possibility that Ratcliffe did, and knew he was doing, back door searches off of Stellar Wind production.

In any case, Ratcliffe’s admission does raise some interesting timing questions about back door searches.