Finally! That Person Who Claims Section 215 Involves Interception of Communications! 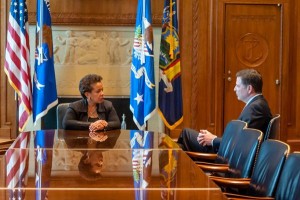 For two years, a key pushback strategy against those complaining about the phone dragnet program collecting records of every single American has been to falsely claim that opponents of the dragnet were claiming the dragnet collected content.

Of course, this was a straw man, as Mike Lee laid out brilliantly during his second speech supporting Rand Paul’s filibuster the other night.

Interestingly enough, this is very often a straw man argument that is thrown out by those who want to make sure that section 215 of the PATRIOT Act is reauthorized without any reforms. They claim that those who are opposed to this type of action are out there falsely claiming that the NSA is listening to phone calls over this program.

Well, that accusation of falsehood is, itself, false. That accusation of falsehood is, itself, a straw man effort. It is a red herring. It is a lie. It is a lie intended to malign and mischaracterize those of us who have genuine, legitimate concerns with this very program, because the fact is we don’t make that argument. The argument we are making is that the NSA doesn’t even need to do that. The NSA can tell all kinds of things about people just by looking at that data.

Because it is automated and because it is within a system thatoperates with a series of computers, they can tell very quickly it is alot less human resource-intensive than it would be if they were havingto listen to countless hours of phone conversations. It is a lot moreefficient.

Nevertheless I finally have — after two years of this debate — found someone actually suggesting that Section 215 involves the interception of communications. 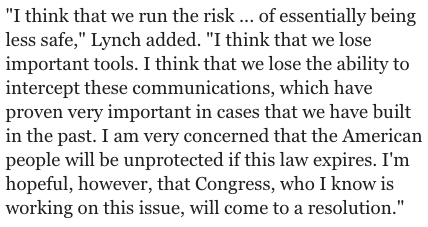 Now, to be fair, Attorney General Loretta Lynch likely misstated here. Or perhaps because she knows that the dragnet serves to identify content of interest, she may treat the two as connected (because they are to a degree program defenders like to obscure). Or maybe she is simply admitting what dragnet opponents keep arguing — that collecting metadata amounts to interception of very revealing data. [Update: As Josh Gerstein points out, she could be talking about Roving Wiretaps, which would mean CBS should not introduce this paragraph as being about the phone dragnet.]

Whatever the reason for AG Lynch to make this claim, I think it worth noting that the most prominent person suggesting that Section 215 gives “the ability to intercept communications” is the nation’s top law enforcement officer, not some dirty hippie trying to impugn the phone dragnet.