I Am Ted Williams’ Head 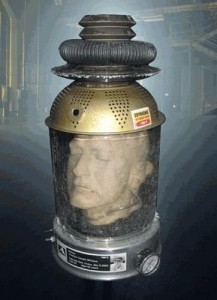 Okay, long story short, a couple of months ago my wife set me up with her dermatologist for a head to toe skin exam to insure against skin melanoma. A perfectly reasonable thing, though, to be honest, would not have otherwise been on my pretty much lunkheaded list of things to do.

Okay, so, today was that appointment. A rather attractive woman doctor searched me from head to toe (no, not “there” you perverts) and found, after five decades of life in the desert sun, that I had zero issues. But then she asked if I had any “concerns”, and a friend had, a couple of months ago, pointed out some splotches on by bald ass head.

So, I mentioned that and the pretty doctor explored my cranium and, among randomly assholey and curmudgeonly thoughts, found several “surface areas of concern” on my scalp. She promptly took out a Batman Mr. Freeze like can of torture and nuked my crown with some freaking liquid hell. Cool at first, but then quickly like a blowtorch cutting into your skull. Ow!

Oh well, once over, stung a little, but no big deal. Except I looked at me skull in teh mirror and it looks like a lunar landscape. Jeebus.