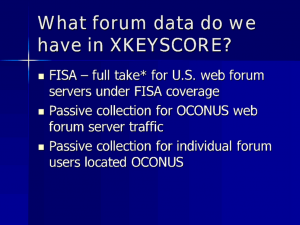 Among the document dump associated with the Intercept’s two stories on XKeyscore, there’s one that has importance outside of the discussion of how XKeyscore works in the slide deck on how XKS works on web forum data.

It reveals what was fairly predictable, but has never been confirmed: That the NSA obtains “full take” on US-based web forums that it can get FISA orders for.

This has been suggested in a number of terrorist proceedings — that the targets were first identified in a forum, and from there targeted for more surveillance (or, just as often, for an FBI undercover sting).

The XKS deck in question further makes clear that the NSA saves all of the data from such forums, so that data will come up in XKS queries going forward. Further, the NSA can pull the messages that use one of the most popular extremist tools for encryption.

All this almost certainly means that the same web forum data would be available to FBI Agents for back door searches at the Assessment level, so even the mere participation in a web forum may target someone for further investigation (or even, for coercion to become an informant himself).

Again, this has been fairly clear for some time. But this slide deck confirms what the government has been obscuring from defense attorneys.