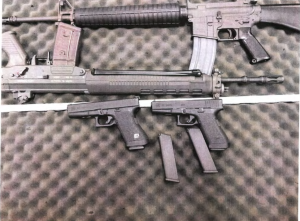 I have been wondering whether the FBI has been coy about the ISIS-related arrests they’ve leaked to the press, in part, because those “terrorist plots” look minor compared to the murder, allegedly by Dylann Roof, of nine people at a black church in Charleston. As of four days ago, after all, Jim Comey was still weighing whether the attack on the historic black church by a right wing extremist who had written a manifesto explaining his views is terrorism. Did FBI miss the Charleston terrorism attack because it was focusing so much more closely on potential ISIS attacks? Does it want to avoid calling it terrorism because it would mean they failed to prevent a terrorist attack?

I grew all the more curious when FBI announced that Roof only managed to purchase the gun for the attack because his March admission to possession of drugs in conjunction with a [local officials have since corrected the record to reflect a misdemeanor arrest] arrest did not get processed before the 3-day window during which dealers have to wait on background checks.

On April 11, Roof attempted to purchase a handgun from a store in West Columbia, South Carolina, a near suburb of Columbia. That day was a Saturday. On the next business day, April 13, an examiner in our West Virginia facility was assigned the case and began to process it.

Her initial check of Roof’s criminal history showed that he had been arrested in South Carolina March 1 on a felony drug charge. This charge alone is not enough to deny proceeding with the transaction. As a result, this charge required further inquiry of two potential reasons to deny the transaction. First, the person could have been convicted of a felony since the arrest. Second, the underlying facts of the arrest could show the person to be an unlawful drug user or addict.

So the court records showed no conviction yet and what she thought were the relevant agencies had no information or hadn’t responded. While she processed the many, many other firearms purchases in her queue, the case remained in “delayed/pending.”

By Thursday, April 16, the case was still listed as “status pending,” so the gun dealer exercised its lawful discretion and transferred the gun to Dylann Roof.

Had the FBI tracked down Roof’s admission to doing drugs before that 3-day window expired, he might not have gotten the gun he used to kill 9 people, and maybe their lives would have been saved. (See this story from today on inaccuracies in the local records on Roof’s arrest.)

The release today of information on Alexander Ciccolo, the estranged son of a Boston cop who is charged with illegal gun purchases but allegedly was planning to conduct an ISIS-inspired attack on a university outside of Massachusetts, makes the comparison of these two alleged aspiring terrorists all the more poignant.

According to the detention memo and reporting from ABC, Ciccolo has had long difficulties with mental illness, and embraced Islam in roughly March 2013. On September 11, 2014, a “close acquaintance” (who may have been his father) reported him to the FBI, when they started monitoring his Facebook. On June 24 (just incidentally, a week after the Charleston attack, but also several weeks after Boston cops shot Usaama Rahim on June 2, and the month after Dzhokhar Tsarnaev (Ciccolo’s father took part in the manhunt for Tsarnaev) got sentenced to death in Massachusetts), an undercover informant (described as a “cooperating witness”) met with Ciccolo face-to-face; it’s unclear how long they had corresponded online first and how discussions of an attack first came up.

The detention memo makes it clear that Ciccolo was discussing attacks designed to inflict maximal casualties and he was modeling them at least partly on the Boston Marathon attack. Ciccolo — a cop’s son — said he had grown up around guns, so on that level, at least, he was probably far more competent than most plotters caught in stings. And while, as with most transcriptions of FBI recordings, this has lapses, the many changes in Ciccolo’s plans, as reported to the informant, makes it sounds like he was driving this plan (but also make him sound mentally ill). So Ciccolo looks like more of a threat than some of the people the FBI has caught in an FBI-planned plot.

That’s why the arrest and timing is interesting. On February 17, 2015, this guy — who was supposedly obsessed with Islam — was convicted of drunken driving, but given probation. That made it illegal for him to possess a gun that had been involved in interstate transit. An affidavit accompanying the detention memo describes that on July 2, after prompting from the informant, Ciccolo responded, “You get the rifles, I’ll get the powder” — though it also said Ciccolo had earlier “planned to rob a gun store to obtain firearms” — which for a number of reasons make the guns one of the dodgy aspects of his sting. On July 3, Ciccolo bought a pressure cooker from WalMart.

But you can’t arrest someone for buying a pressure cooker (at least not yet), especially given that he appears not to have obtained any powder to use in a pressure cooker bomb, given what they found in a search of his place. But you can arrest a felon for possessing guns.

On July 4, the informant gave Ciccolo (the memo says he “took possession of” and there is no mention of money exchanged) four guns, after which the FBI immediately arrested him.

And then the FBI sealed everything up. The docket still appears to be sealed, but he was apparently arraigned on July 6 (after two days), and the detention memo notes that he waived Miranda rights. “After the defendant was arrested, he waived his Miranda rights and spoke to FBI Special Agents Paul Ambrogio and Julia Cowley. The defendant refused to talk about the guns with which he was arrested but he reaffirmed his support for ISIL.”

The local press did report on the FBI’s search, but was denied information until today.

And thus far, at least, they haven’t charged Ciccolo with anything more — material support or a plan to engage in terrorism.

Now, as I have said, given the evidence in the documents released so far, it appears that Ciccolo may present more of a threat than most FBI sting targets (though he also seems like a guy who should have gotten mental health care years ago). As such, getting guns into his hands was a way for the FBI to get him in custody. We shall see how good the evidence is that Ciccolo, and not the informant, was driving the attack.

But ultimately, what we have here are two examples of alleged aspiring terrorists with prior arrest records tied to intoxicating substances that could be used to arrest them if they got a gun. In Ciccolo’s case, that was used as a way to get him in custody and — the FBI suggests — to prevent a planned attack on a college in another state. In Roof’s case, the FBI did the requisite background check but didn’t track down the actual records in timely fashion. Had the FBI tracked Roof — whose online activities the FBI continues to investigate, but appears to have been active on at least one Neo-Nazi site — as closely as it had been tracking Ciccolo, it might have caught him in a sting too.

I’m not saying the FBI should have prevented the Charleston attack; I don’t think it’s possible for FBI to stop everything, nor do I support the kind of dragnets that might try.

But the comparison of what happened to these two alleged aspiring terrorists when they tried to obtain guns is notable.